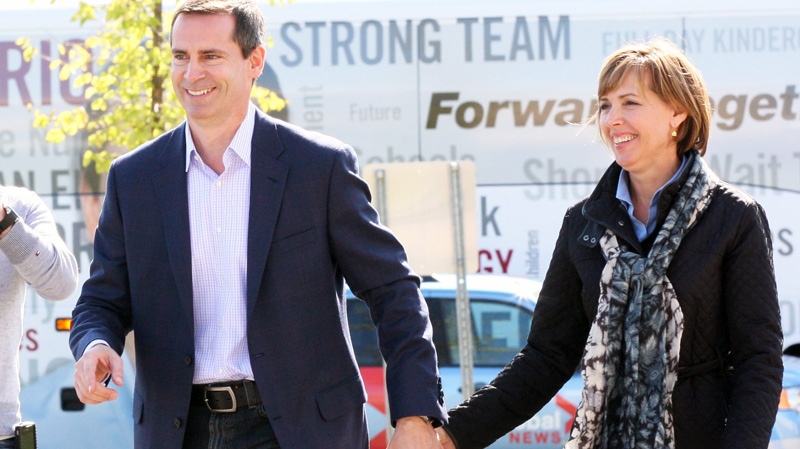 The buses are now parked, the leaders have had their voting-day photo opportunities and we all await the judgment of the Ontario electorate.

To form a majority government, one party will have to elect 54 members to Ontario's 107-seat provincial parliament. Otherwise, the first minority parliament in the province since 1985 will result.

Here is where some of the closest and most interesting fights can be expected, based on polling, history and where the leaders have spent the most time since the election writ was dropped on Sept. 7.

Four days earlier, a poll conducted for the Toronto Star indicated that DiNovo could be trailing in her riding.

Federally, Peggy Nash went back to Ottawa in the May 2 election as the area's NDP MP, but three years earlier, voters dumped her for Liberal Gerard Kennedy.

Trinity-Spadina - The leaders have all made appearances here, but that's partly because so many large venues and media outlets are located in the downtown riding.

Veteran NDP MP Rosario Marchese has a high-profile Liberal opponent in former mayoral candidate Sarah Thomson, so it could be a close battle.

Federally, Olivia Chow, widow of the late NDP leader Jack Layton, has represented Trinity-Spadina since 2006. She has been helping in part by lending her voice to automated telephone calls on Marchese's behalf.

York-South Weston - NDP candidate Paul Ferriera and Liberal Laura Albanese have each won an election and lost -- by relatively small margins. This will be round three.

Horwath held her first rally of the campaign in the riding on Sept. 7. The NDP defeated federal Liberal MP Allan Tonks here in the May 2 election.

York Centre - This could be one of the Tories' best shot at a Toronto seat. Veteran Liberal MPP Monte Kwinter could be in a tough battle with the PC's Michael Mostyn.

There is a large Jewish community in the riding, and Mostyn is former national director of public affairs for B'nai Brith Canada.

Davenport - With no incumbent, the NDP hope they can pick up the seat, following on the federal win of MP Andrew Cash in the spring. Polls suggest this riding is the NDP's for the taking. Horwath held an announcement in the riding.

Eglinton-Lawrence - This might be worth watching as former mayoral candidate Rocco Rossi, once the fundraising chief for the federal Liberals, is running for the PCs against veteran Liberal MPP Mike Colle. Hudak has campaigned in the riding.

Pickering-Scarborough East - With no incumbent, this should be a scrap. Both Hudak and McGuinty have made stops here.

Thornhill - This could be a very close fight as the riding tends to change hands easily. The incumbent is Tory MPP Peter Shurman.

Hudak made an appearance in the riding.

Burlington - With no incumbent, the traditionally-PC riding could be more competitive than usual. McGuinty has visited here. Hudak has made two stops.

Oakville - Both Liberal Leader Dalton McGuinty and Progressive Conservative Leader Tim Hudak made stops here on Oct. 5. McGuinty and Hudak also made stops there the same day on Sept. 22.

The riding is currently held by the Liberals' Kevin Flynn. The Conservatives held it from 1990 to 2003.

Bramalea-Gore-Malton - This pie-shaped riding includes Lester B. Pearson International Airport and goes north and west from there. The Liberals have held it for two elections, and it voted PC in 1995 and 1999.

But to add to the mix, the NDP came tantalizingly close here in the May 2 federal election. NDP Leader Andrea Horwath made three stops in the riding. McGuinty campaigned there on Sept. 30.

The poll released Sept. 25 by the Toronto Star suggests it will be a very tight Liberal-PC fight.

Brampton-Springdale - This riding is just west of Bramalea-Gore-Malton, and has been repeatedly visited by Hudak. He made his no-tax-hike pledge from an event there.

Brampton-Springdale voted PC during the Mike Harris years of the 1990s and has voted Liberal during the McGuinty era. The Star poll indicates a tight battle, with a slight edge to the PCs.

Most of the Mississauga ridings promise to be tight races. Mississauga South is where the contentious natural gas-fired electrical generating plant was to be built. The Liberals cancelled the project late in the campaign.

Other Toronto-GTA ridings to watch:

Both Horwath and Hudak have made visits there.

Windsor West - High-profile former cabinet minister Sandra Pupatello left elected politics this year, so her old riding should make for a tight fight between the Liberals and NDP. Federally, the NDP won there in the spring.

Federally, Paul Dewar, who recently announced he is running to become the NDP's leader, is the MP.

Thunder Bay-Atikokan - The NDP lost here by a close 50 votes in 2007. Horwath has made repeated visits to Thunder Bay and has spent the most time in the north of any leader.

Timmins-James Bay - This far-north riding could be an NDP-PC battle.  The NDP have a veteran candidate in Gilles Bisson. Federally, Charlie Angus won re-election as an NDP MP this spring. But at least one poll suggests a close race.