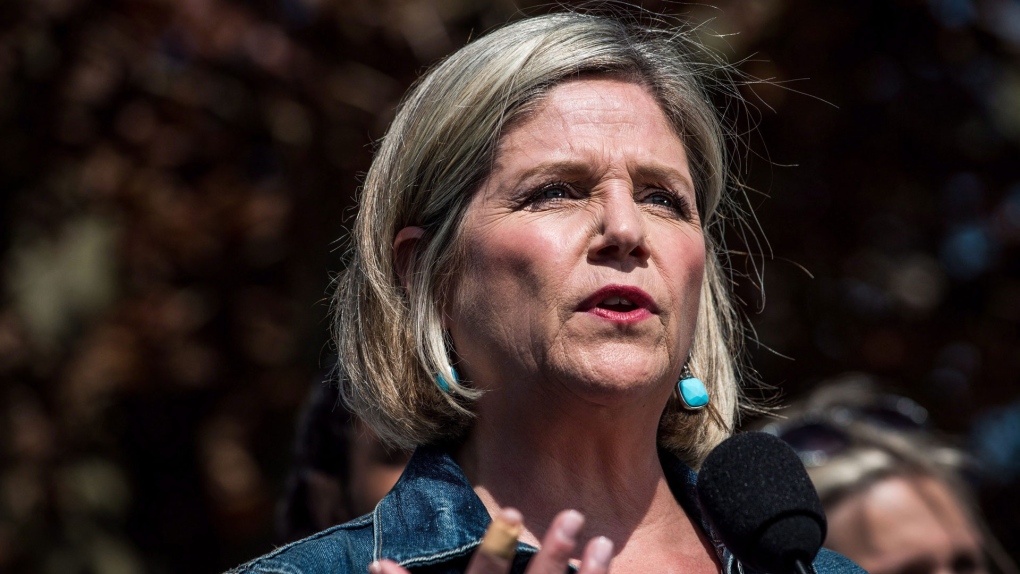 ST. CATHARINES, Ont. -- Sitting behind a small table at the back of her campaign bus as it rumbles down the highway, Andrea Horwath ponders the winding road that has led her to the very doors of the premier's office.

If polls are even close to right, the leader of Ontario's New Democrats has for the first time a real chance at crossing the threshold after Thursday's provincial vote.

Life, the Hamilton politician says, has prepared her for this moment.

"They don't call me the Steeltown Scrapper for nothing," Horwath says. "As a cocktail waitress for 10 years, I know how to hold my own. I do know how to go to the mat."

She appears to have gained more confidence and mastery of the issues since the 2014 campaign, when she skewed to the right in an effort to bleed centrist Liberal votes -- merely angering many long-time supporters.

Some voters are concerned about Horwath's current platform that, among other things, promises significantly more spending to end "hallway medicine," $12-a-day childcare, as well as dental and drug coverage for most people.

"I'm afraid that she's promising all this free stuff," said Helen Petrou, watching from across the road as Horwath visited a Toronto ice cream parlour. "Where's she going to get the money?"

It's a question uppermost in many minds -- particularly those who have come to view New Democrats as a party not to be trusted with the keys to the provincial vault.

Horwath, no stranger to the criticism, makes no apologies for her platform.

Unlike her Progressive Conservative rival Doug Ford, Horwath says she is at least upfront about where the money will come from: by raising taxes on the wealthiest Ontario residents and corporations.

"Our vision is more balance in terms of the sharing of the prosperity," Horwath says. "The only way you can do that is with these kinds of public policies and tax measures."

Encouraged by the polls, Horwath has been canvassing Liberal and Tory ridings, engaging the crowds, hugging babies, and picking up dogs.

"She's really developed this kind of folksy thing," says Peter Graefe, an associate professor of political science at McMaster University. "She strikes me as someone who always tries to rein herself in because she's not confident that she will be able to give the right answer in the moment, (but) this time she just has a bit more confidence that she'll be able to say what's right."

Horwath herself chalks up her evolution from four years ago to factors that include what the party is promising this go round.

"There's a sense that everything has matched up," Horwath says. "It's easy to talk about those things when they're ingrained really in who I am. That's part of the energy that I have."

The daughter of a Slovakian immigrant who became an auto worker and a French-Irish mother, Horwath did labour studies at Hamilton's McMaster University -- waitressing to make ends meet -- and worked at a legal clinic. She ran unsuccessfully for federal office in 1997 before winning a seat on Hamilton council, where she served three terms.

Horwath jumped to provincial politics in a byelection in 2004, becoming NDP leader in 2009. She helmed a strong showing in the 2011 election that left the NDP holding the balance of power but disappointed in 2014, resulting in a bruising leadership review. Dragging a party she says was mired in the past into the competitive present has been "quite demanding."

What has helped sustain her, she says, are those times she has made a positive difference in people's lives.

"It's all of the wins if you will -- w-i-n," she says punning on her rival's name, Liberal Leader Kathleen Wynne. "That helps you keep going."

Given the pressure-cooker of a campaign, Horwath for the most part retains her affability. She says she's finally learned the "art of the nap" -- something her dad was big on -- and tries to ensure she gets six hours of shut-eye a night.

"I just take my makeup off and go to sleep -- ear plugs in so that I don't have any distractions," she says.

When she wants to escape for a bit or needs a reality check, Horwath turns to her son or brother. Or she picks up the phone and chats with a few long-time friends.

"They get the drill," she says. "Every time I call, it's top secret, confidential and goes nowhere."

As the polls indicate, Horwath undoubtedly has the wind in her sails.

Ironically, perhaps, the electoral mood is similar to the sentiment that propelled the Liberals under former leader Dalton McGuinty to office in 2003 after eight years of Progressive Conservative government. His campaign slogan back then: "Choose Change."

Myer Siemiatycki, who teaches political science at Ryerson University, says Horwath has been able to portray herself as the change candidate.

"She's very much signalling that she hears the mood of the public that wants something different and she's played that very effectively," Siemiatycki says. "She's a lot steadier in her messaging, in the signals that she's sending, of being a trustworthy architect of change."

Had Ford's predecessor Patrick Brown not been forced to resign on the eve of the campaign, McMaster's Graefe says Horwath might well have found herself sidelined again. Brown had a costed platform with promises that would have played better to Wynne's policy strengths, he says.

Instead, Graefe says, Ford's determination to run a bumper-sticker campaign based on cutting taxes and making life more affordable for the "little people" has created a popularity contest that suits Horwath.

"It's a personality campaign," Graefe says. "It's a populist campaign."

If the NDP does win the big prize on Thursday, voters can expect Horwath to start implementing her ambitious set of promises right away, she says.

For now, though, an exhausting but exhilarating campaign has a couple more critical days, and if Horwath has any self-doubt or fear, it's well hidden.

"I do have a very positive, optimistic personality," she says. "That's just who I am."