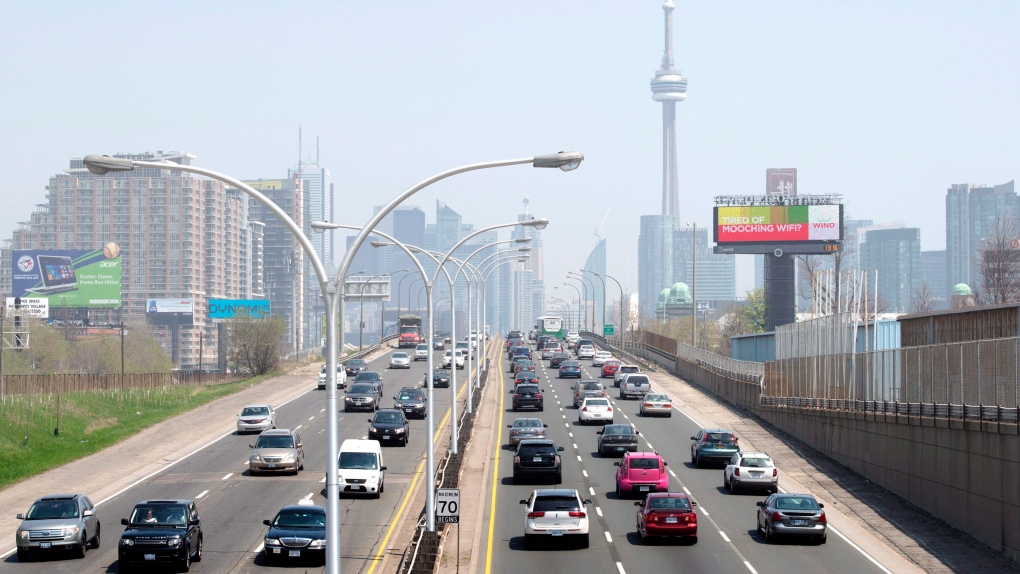 Smog blankets the Toronto skyline as the first hot weather day arrives on Saturday May 9, 2015. (Frank Gunn /The Canadian Press)

Jahangir Bhatti used to eat out three or four times a week, but had to scale back when restaurants near his home in Mississauga, Ont., raised menu prices to keep up with a higher minimum wage.

At home, the 30-year-old father of two finds himself keeping a sharp eye on power consumption -- his monthly hydro bill has jumped from a high of $100 eight years ago to as much as $250 today.

It's families like Bhatti's that the three main political leaders vying to become the next premier of Ontario are promising to help, from affordable child care for today to post-secondary tuition down the road.

"Life is getting tougher from the number of expenses that have come up," Bhatti said. "This is a bipartisan issue. The affordability is just not there."

The rising cost of living is a common thread uniting many of the more than 6.4 million people living in the vast, vote-rich region described as the Greater Toronto Area, which includes Toronto and the surrounding municipalities of Durham, Halton, Peel, and York.

Bhatti has decided to vote for the Progressive Conservatives on June 7, but he said many others in his community are looking to the left of the political spectrum.

Political observers agree that an increasingly competitive race will likely be decided by the residents of Toronto itself and its many suburbs, often referred to by their respective area codes of 416 and 905. The region contains roughly 57 of the 124 seats up for grabs on election day.

The three main party leaders spend the lion's share of their campaign time crisscrossing the region between Oakville and Whitby trying to zero in on issues that may get voters to the polls.

Doing so, however, is no easy matter.

Messages of affordability resonate with Danny Goguen, 38, who lives with his family in Oshawa. Goguen said fellow residents of the city east of Toronto perceive the governing Liberals as untrustworthy and are hungry for relief from rising daily living expenses.

One of the issues that will propel Goguen to the polls will be gas prices, which have soared to a current monthly average of $1.37 per litre and placed a strain on his budget as he travels the province distributing goods for a manufacturer.

"How does it skyrocket that much?" he asked while on the road for work, adding government mismanagement must have played a role. "Why do us tax payers have to suffer for the fact that they screwed up?"

Lauren Simmons, a 36-year-old teacher living in downtown Toronto, takes the opposite view.

The self-professed "downtown elite" lives in the heart of Toronto, an area often viewed as a world away from the outlying suburbs.

While travelling to a union meeting on public transit, the confirmed NDP voter said taxes lay at the heart of her political leanings for a completely different reason.

"I'm of the mindset that if taxing me is going to make things better for my neighbour, then by all means tax me," she said. "But especially tax people who do things like drive cars or put up houses or generally do things that involve throwing around a lot of money."

The views of Goguen and Simmons appear to reinforce past depictions of the GTA, which suggest that Toronto is perpetually pitted against its surrounding communities when it comes to values and voting priorities.

The issues that resonate with students, transit users and unionized public-sector professionals in the city centre, some contend, won't connect with the families, new Canadians and private-sector workers who increasingly define the vast territory of the 905.

But past voting patterns and present-day concerns suggest the picture is more complex.

Darrell Bricker, chief executive officer of Ipsos Public Affairs, said the 905 has proven to be a changeable and highly influential region over the past several federal and provincial elections.

Despite the size of the region and diversity of its population, Bricker said the 905 has tended to vote as a single wave that's often tipped the balance in recent votes.

Dominance in the 905 has been crucial any time political power changed hands in Ontario since 1990. Mike Harris swept the 18 seats available in the region in 1995 before becoming premier, and Dalton McGuinty kicked off 15 years of Liberal reign after securing two-thirds of available seats in 2003.

This time, with 29 seats in play, Bricker said voters in the 905 region are even more likely to be kingmakers.

"These people out there, they're the ones who are going to decide the election," Bricker said. "And their values are similar whether they live in Milton or Markham."

Richard Lorello, a 58-year-old IT manager from Kleinburg, north of Toronto, may present as a stereotypical 905 resident when he expresses distaste for Kathleen Wynne and her scandal-plagued Liberal government.

He, like residents across the region, voices frustration at soaring hydro rates that have prompted grand pledges from both opposing parties. But Lorello's desire to see a renewable energy strategy remain in place would find sympathetic echoes among Toronto voters.

And he said an issue like transit, long believed to alienate voters outside of the downtown core, actually has considerable traction in his community as well.

"I know the city of Toronto has congestion issues, but there's a lot of investment going on in Toronto as far as public transit," he said. "I think generally people in the 905 would like to see a larger share of public transit dollars spent in the 905 area."

Transit would also be welcome in Scarborough, in Toronto's east end, that features a demographic makeup comparable to some parts of the 905 despite featuring a 416 area code.

But pollsters expecting Scarborough residents to subscribe to the popular conception of a suburban voter would hear a different story if they were to visit the community centre that 63-year-old Enrique Robert runs.

Robert, who shares first-hand experiences with the immigrants and political refugees he sees each day, says the non-partisan political discussions that take place at the centre feature conversations on health care, poverty, and other issues related to the province's social safety net. But chief among residents' concerns is the need for decent jobs paying a living wage, he said.

"The purpose of the minimum wage is when you are an untrained worker you can have a poor but decent life," he said. "That is not happening at this moment."

But while the laundry list of topics motivating GTA voters may be as diverse as the voters themselves, there does appear to be one common thread -- skepticism about the candidates vying for the chance to take the issues on.

Goguen, whose concern about gas prices is equalled by his eagerness to see more affordable child-care rates in the province, put it this way.

"These three candidates that are in there, they'll say anything," he said. "There's no actual substance to their platforms except to bash each other."