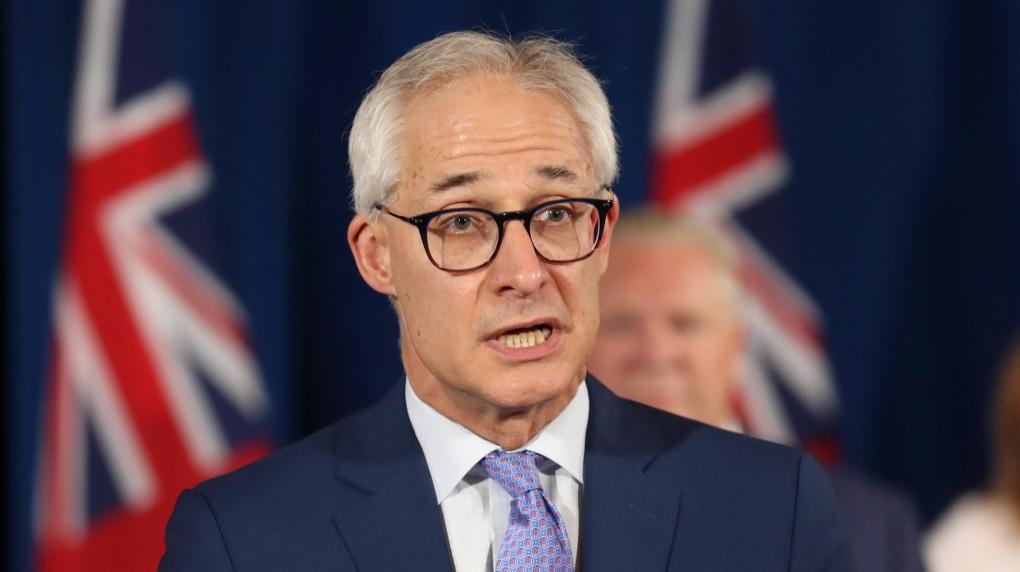 Dr. Dirk Huyer, Chief Coroner for Ontario speaks at the lectern as the government gives an update on the COVID-19 situation in the province at Queen's Park, in Toronto, Wednesday, June 24, 2020. THE CANADIAN PRESS/POOL-Richard Lautens

TORONTO -- The office of Ontario's chief coroner is embarking on a review of unidentified human remains found in the last four decades to determine if any are linked to former residential schools.

Dr. Dirk Huyer said that in many cases, his office has not fully investigated human remains when they are deemed to be more than 50 years old.

Huyer said he's been reconsidering that approach and now recognizes that his office may have missed identifying graves linked to residential schools in the province.

"Burials that may have occurred within the residential school period of time could be many years old," he said in an interview Tuesday.

"We are going to look back into our files to see if there are cases ... that are at or near residential schools."

He said the finding of unmarked graves near or at residential school sites across Canada earlier this year played a part in the decision to revisit old files.

"This summer, significant focus returned to that topic in what I believe is a national way, in a very significant way," he said.

Huyer said a team from his office will be examining findings that go back to the 1980s to determine if further investigation is required in any of the cases.

He said the team will also look for cases where an Indigenous child could have been buried outside grave sites near residential schools.

Remains of a child under the age of 14 were discovered near the Mohawk Institute Residential School in Brantford, Ont., in August of last year.

On Saturday, Brantford police said the remains are "not modern and do not have any forensic value" and added that no further investigation would be conducted by their officers.

Huyer said he has been working with the Six Nations of the Grand River First Nation and their Survivors Secretariat on the Brantford finding.

In May, a First Nation in Kamloops, B.C., announced that ground-penetrating radar had detected what are believed to be the remains of 215 Indigenous children in unmarked graves at the site of a former residential school.

Ontario has committed to spending $10 million over three years to identify, investigate and commemorate burial sites on the grounds of former residential schools in the province.

The funds will also go toward culturally appropriate supports for school survivors, their families and communities, and the entire process will be Indigenous-led.

The National Truth and Reconciliation Commission identified 12 locations of unmarked burial sites in Ontario. The province said there are likely more.

The final report from that commission detailed mistreatment at Canada's residential schools, including emotional, physical and sexual abuse, and more than 4,000 deaths at the institutions.

It reported known deaths of 426 children who attended schools in Ontario and an unknown number of children still missing.

This report by The Canadian Press was first published Oct. 19, 2021.

From the '60s Scoop to now: Canada still separating Indigenous children from families

'It's going to take more': One of the youngest First Nations chiefs has a message for Canadians

CTV Winnipeg: Stories of Truth and Reconciliation from across Canada