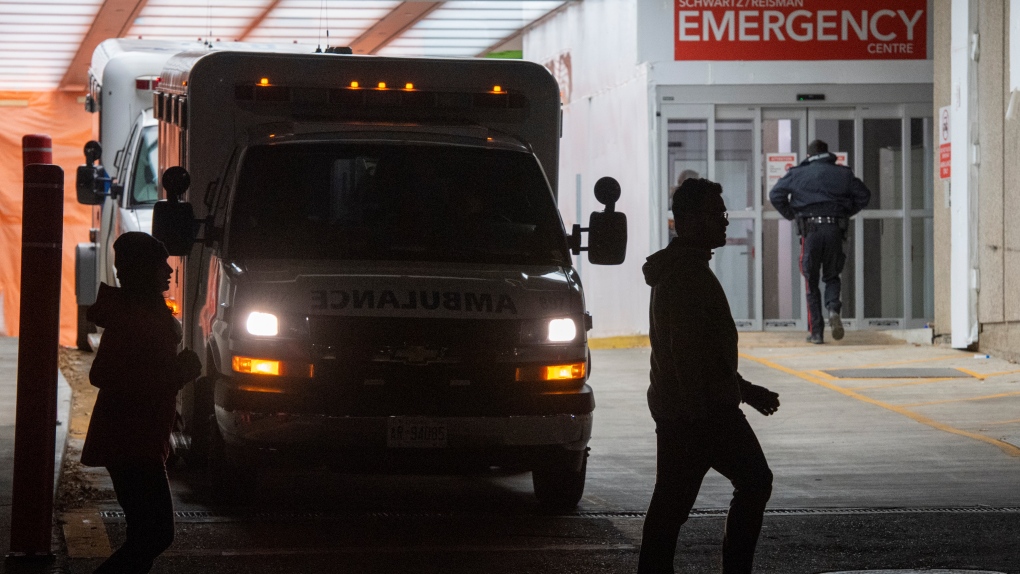 People pass by a hospital emergency in Toronto on Wednesday, November 18, 2020. THE CANADIAN PRESS/Frank Gunn

TORONTO -- Ontario health officials say there is evidence to suggest that the U.K. variant of COVID-19 may cause more severe illness in some people.

Dr. Vanessa Allen, chief of microbiology and laboratory science at Public Health Ontario, made the remark at a news conference on Monday after reporting that the province has already seen 34 cases of the U.K. variant so far.

Updated information from York and Toronto health officials later in the day added nine more cases to the total. Of the 43 cases, 15 are in York Region, 10 are in Toronto, seven are in Simcoe, three each are in Peel Region, Durham Region and Ottawa. Kingston and Midddlesex-London have also had single cases.

“There is some initial data that suggests that it's both more transmissible … and now there is more recent evidence to suggest that it might cause more severe disease in some individuals,” she told reporters.

Officials said there are three primary variants of concern, including the U.K. variant, the South African variant and the variant from Brazil. The latter two have not been detected in Ontario to date, officials said on Monday.

Ontario reported 1,958 new cases of the novel coronavirus on Monday as the province marked the anniversary of detecting its first infection. The fewer than 2,000 cases is a decrease from Sunday’s report when 2,417 were logged.

Despite the decrease in new cases, Ontario’s Chief Medical Officer of Health Dr. David Williams said people should remain vigilant as experts learn more about the new COVID-19 variants and their presence in the province.

“With the aggressive nature of the U.K. variant in particular, and it's now in our presence among our different health units, the reasons for being cautious, the reasons for being careful about masking and distancing has to be enhanced even further because it can be spread with breaches to those protocols in a very short period of time,” Williams said on Monday during the news conference.

Officials said the province is trying to do everything they can to contain "every single case” of the variant found and increase their capacity to find them.

“We were aware that the U.K. variant been around for a while. We probably assumed it was coming into our province back in December,” Williams said.

“You watch the U.K. and the Ireland rendition it just took off exponentially. We haven’t seen that yet. That gives me some reassurance that our measures are holding it.”

“But we have to be vigilant, we have to be careful, and keep our measures up and we have to keep doing the testing and looking forward and identifying and see if we can keep weathering this one out.”