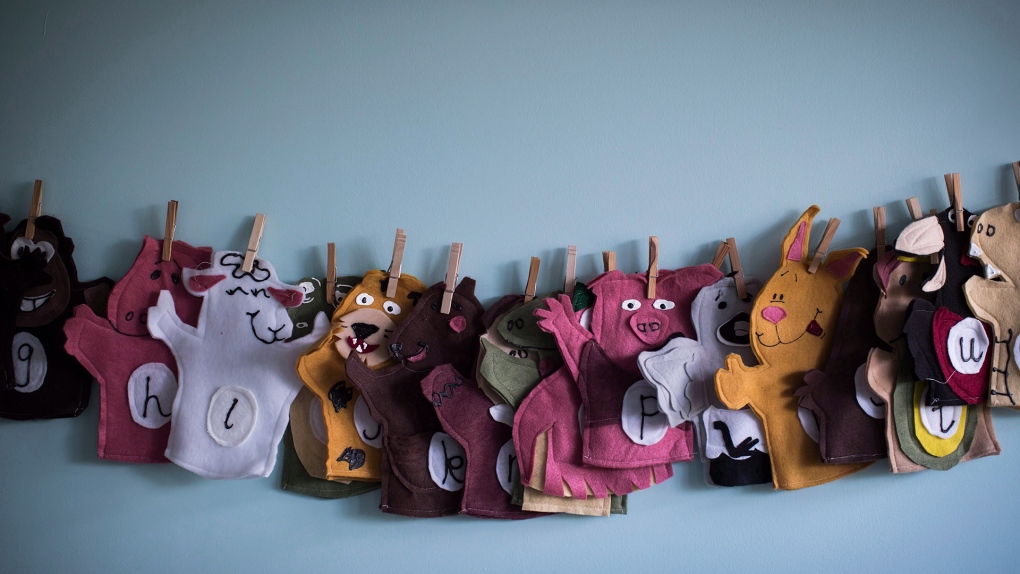 Animal puppets are seen at a CEFA (Core Education and Fine Arts) Early Learning daycare franchise, in Langley, B.C., on May 29, 2018. THE CANADIAN PRESS/Darryl Dyck

Ontario child-care operators and staff are calling on the provincial government to take steps to make daycares safer during the COVID-19 pandemic and to ensure the sector's long-term viability.

One immediate step urged by the dozens of operators, labour groups and public health experts who signed on to an open letter to the premier released Wednesday was to reinstate eligibility for PCR testing.

Late last year in response to a surge in Omicron cases, the province limited access to PCR testing to high-risk settings, which doesn't include child-care centres or schools, except if a student or staff member develops symptoms while at school.

The child-care operators and staff say allowing access to PCR testing would mean centres could track cases and parents would only have to isolate at home with their child for one or two days in the event of a negative result, instead of five.

"We have the vast majority of our families who don't have the privilege of being able to stay home with their children for another five days," said Sheila Olan-Maclean, a child-care operator and the president of the Ontario Coalition for Better Child Care.

Jessica Tomas, a registered early childhood educator, noted that with no access to PCR testing, the government is also no longer reporting the numbers of COVID-19 cases in child-care centres.

"Working with unvaccinated and unmasked children, I'm overwhelmed daily by the pressure to keep everyone safe," Tomas said.

"Now, with the Ford government lessening the reporting that I relied on as a professional, I am more unprotected than ever. The masks and the tests that were promised by the ministry haven't been received."

The province announced earlier this month that it was sending N95 masks to all schools and child-care centres as Ontario contends with the highly infectious Omicron variant.

A government spokeswoman has said that an "ongoing and steady supply" of masks will be provided to daycares, but many operators say they have only received enough for a few days, or at most a week or two, with no indication of when they will receive more.

Carolyn Ferns, with the Ontario Coalition for Better Child Care, said as a parent herself of a kid in child care, the PCR tests that her family could previously access provided peace of mind.

"We came to rely on on PCR testing to be able to reliably say, 'Is this COVID? Is this the sniffles?' and be able to go back to child care," she said.

Olan-Maclean said her child-care centres have not been charging parents who have to keep their children home, often for five days at a time due to the isolation rules, and that has left her projecting a $400,000 deficit this year.

The open letter sent Wednesday also calls for the province to provide enough HEPA filters for each classroom and common area in Ontario's over 5,000 child-care programs -- settings in which children are largely unmasked.

It feels like child care is not a priority for the Ontario government, Olan-Maclean said.

The letter also calls on the government to increase financial support to licensed child-care programs to ensure recruitment and retention of staff, and to sign on to the federal government's $10-a-day child-care plan.

Premier Doug Ford has said his government is "very, very close" to a deal with Ottawa on child care.

Education Minister Stephen Lecce has said that the province is pushing for more than the $10.2 billion on offer from the federal government to ensure that fees can be reduced to $10 a day, as well as trying to ensure the deal goes beyond five years and takes into account the $3.6 billion a year that the province spends on full-day kindergarten.

This report by The Canadian Press was first published Jan. 26, 2022.

The gunman who massacred 19 children and two teachers at a Texas elementary school was inside for more than an hour before he was killed in a shootout, law enforcement authorities said Thursday amid mounting public anger and scrutiny over their response to the rampage.

There are now 26 confirmed cases of monkeypox in Canada, according to an update from the Public Health Agency of Canada, and the virus has been detected in a new province, with one case in Ontario.

Canada's job vacancies are at a record high