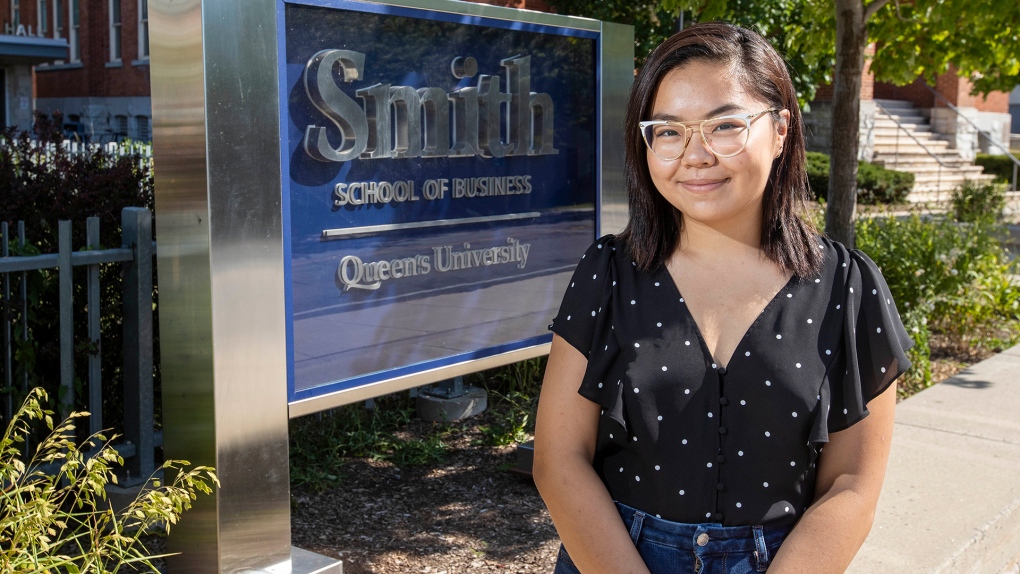 Fourth year Queen's University Commerce student Kelly Weiling Zou poses for a portrait outside Smith School of Business in Kingston, Ont., Friday, Aug. 14, 2020. Business school students in Ontario are sounding the alarm about what they call outright racism from fellow students and a lack of equity and diversity training among faculty. A number of social media accounts have popped up in recent months, anonymously recounting stories of racism happening in universities across the province. THE CANADIAN PRESS/Lars Hagberg

TORONTO -- Business school students in Ontario are sounding the alarm about what they call outright racism from fellow students and a lack of equity and diversity training among faculty.

A number of social media accounts have popped up in recent months, anonymously recounting stories of racism happening in universities across the province.

Kelly Weiling Zou, a 20-year-old Singaporean-Chinese student studying commerce at the Smith School of Business at Queen's, said the racism she witnessed pushed her to create a platform for students to vent about their experiences.

Zou created the Instagram account "Stolenbysmith," which has amassed more than 12,000 followers and shared more than 300 stories, ranging from tales about barriers to career opportunities, social ostracization based on students' backgrounds and encounters with discrimination from faculty.

"The Smith administration has historically failed to respond to students' call to action in addressing issues of discrimination within the school," Zou said in an interview. "We can't change systemic barriers, only they can as they have the power."

Meena Waseem, a second-year business student at Queen's, said her first brush with racism at the school came on just her second day of orientation week last fall.

The 19-year-old said one student leader, also in the business program, used the "N-word" in a song to a room full of students.

"Witnessing this was disappointing and it made me feel unsafe," Waseem said. "This was the first of many experiences which made it clear that racism is normalized here.

"For me personally, being a visibly Muslim brown woman at this school is exhausting," she said. "Being a lower-income student doubles that exhaustion. I have to consistently advocate for my needs."

Brenda Brouwer, interim dean at the Smith School of Business, said the university is working on addressing concerns raised by its students. She called the incident detailed by Waseem "completely unacceptable and deeply troubling" and said it would be a clear violation of the school's code of conduct.

"Improving diversity and increasing inclusion is an urgent priority," Brouwer said. "While progress has been made, we know there is more work to be done, and we will continue to actively foster a culture of inclusion, dignity and respect."

Aba Mortley, co-chair of the council of anti-racism and equity at Queen's, said she works as a bridge between faculty and students in order to bring about discussions on campus and in the wider Kingston community.

"There is no denying that these issues regarding Black and Indigenous people are clear and present," Mortley said. "No one can say that racism isn't happening when it is out in the open."

She said the school is in a better position to work on these issues now, thanks to the recent momentum of the Black Lives Matter movement.

"With all these stories coming out, it is forcing the school to take action," Mortley said.

Sara Reza, a student at York University's Schulich School of Business, said discrimination and racism are also present on her campus.

"Business programs rarely integrate diversity and inclusion, which fails to address the persistent inequality that exists in our communities and worldwide," she said.

Reza said business university programs foster a "hostile environment" in which topics of privilege, inequality and race are rarely brought up in the classroom.

Humera Dasu, a third-year student at York, said she was left feeling uneasy when a white professor and group of students allegedly made inappropriate comments when discussing Islam.

"The professor implied to a class of 50 students that she thinks the religion is oppressive to women," Dasu, 20, said.

"I was deeply offended and hurt.... Islamophobia has been normalized to the point that such a comment can be made in a classroom environment."

Detlev Zwick, interim dean at Schulich School of Business, said the school is aware of concerns brought forward recently by students and graduates.

"The Schulich School of Business does not tolerate or excuse discrimination and racism of any kind. As one of the most diverse business schools in North America, Schulich has a long tradition of actively encouraging and supporting inclusivity and diversity," he said.

"Obviously, more needs to be done and we have already begun taking action in various ways to ensure greater awareness surrounding issues of racism, especially anti-Black racism, as well as sexism and discrimination."

Zwick said the school is also currently in talks with other leading business schools in Ontario regarding several joint initiatives to tackle barriers for Black and Indigenous students, particularly from high schools in economically disadvantaged communities.

This report by The Canadian Press was first published Aug. 24, 2020.