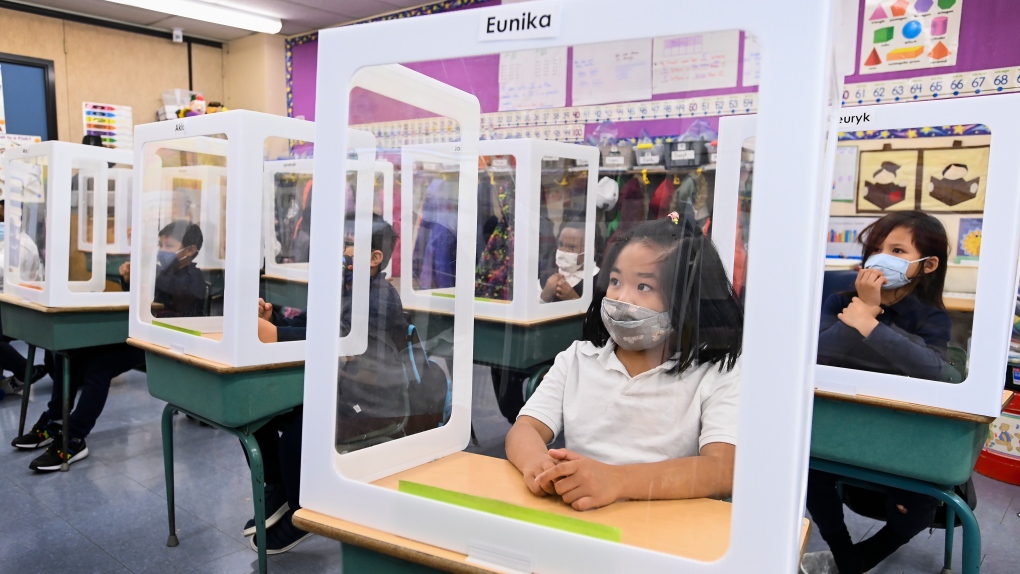 Children wearing masks sit behind screened in cubicles as they learn in their classroom after getting their pictures taken at picture day at St. Barnabas Catholic School during the COVID-19 pandemic on Tuesday, October 27, 2020. (Nathan Denette/The Canadian Press)

TORONTO -- Several southern Ontario school boards that straddle public health units are gearing up to reopen only a portion of their schools to in-person learning next week, adding another layer of complexity to an academic year that's been defined by quick pivots.

The government order allowing schools in seven public health units to reopen physical classrooms as of Monday means nine boards now have to create different plans for different towns in their jurisdiction.

"It's definitely more difficult to have one board be going in two different directions," said Diane Lloyd, chair of the Kawartha Pine Ridge District School Board, which oversees schools in Clarington, Ont., that will remain closed and ones in Northumberland and Peterborough that will reopen.

She said the board began reaching out to parents immediately after receiving word of the plan from the Ministry of Education in an effort to prevent any confusion.

"The challenge is being ready to pivot all the time on short notice," Lloyd said.

That's nobody's fault, she said, as these decisions are made based on the rates of COVID-19 in a community in the interest of public safety, but the "constant change and constant new directives" are still presenting an issue.

She said it will always be hard to work when you're being told to change course before you can make any progress.

Stephen Sliwa, director of the Upper Canada District School Board, said teachers and school staff have gotten used to those sorts of shifts but that doesn't necessarily make it easy.

"They're seeing it as another change in a series of changes that comes with working during a period of extreme uncertainty," he said. "I think all organizations are getting accustomed to adjusting quickly to respond to the changes."

Roughly 40 per cent of schools in his district are in the Eastern Ontario Health Unit, which covers Stormont, Glengarry and Dundas, Prescott-Russell and Cornwall, and will remain closed, he said. The other 60 per cent are located in the Leeds, Grenville and Lanark District Health Unit, and can reopen Monday.

Sliwa said his board's efforts have been focused on educating parents of those students about what the return to class will look like, as the province has instituted new public health measures.

Students in grades 1 through 3 will have to wear masks now, whereas before it was optional, he noted. And the province is also introducing "provincewide targeted asymptomatic testing" and enhanced screening, the Ministry of Education said.

He said some parents have also contacted the board to figure out whether their kids will be returning to class on Monday.

Ontario's associate chief medical officer of health, Dr. Barbara Yaffe, defended the province's plan to reopen only some schools at a news conference on Thursday, saying it's in the best interest of students.

"We definitely want kids to be in school. That is the best thing for them for a whole lot of reasons," she said, but the number of students testing positive for COVID-19 has made it impossible to send everyone back to class.

"There was so much transmission that we felt at that point, going into a lockdown, it would be safer to keep keep them at home," Yaffe said.

She said the government continues to monitor the situation in each region closely so it can reopen schools safely.