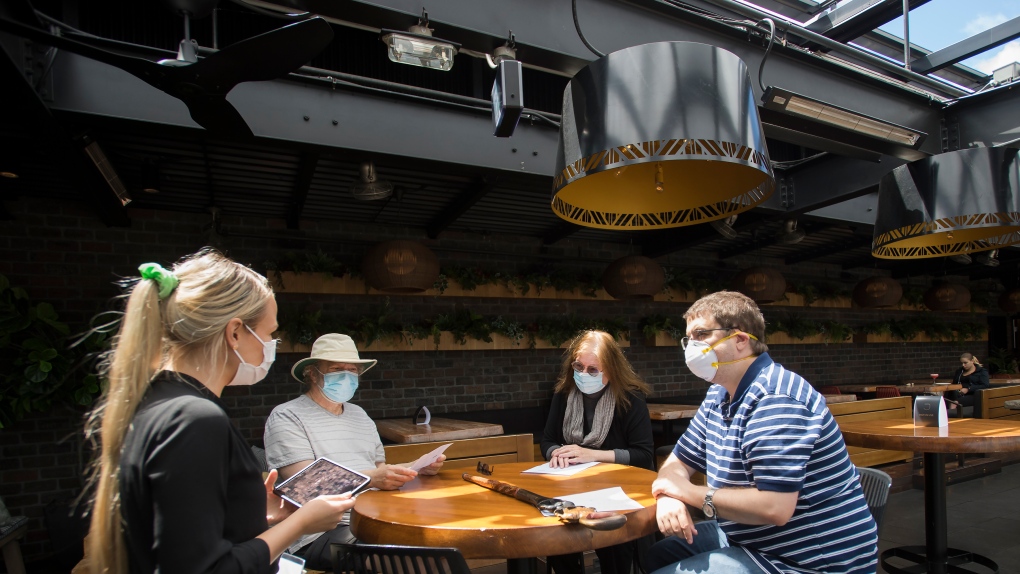 Patrons sit on the patio as waitress Paulina Pasierbek, left, takes orders at Joey Sherway, part of the Joey Restaurant chain during the COVID-19 pandemic in Toronto on Wednesday, June 24, 2020. Toronto and the GTA entered stage two of opening. THE CANADIAN PRESS/Nathan Denette

TORONTO -- The Ford government has amended an existing emergency order to allow some covered outdoor dining areas to open.

Restaurant and bar patios have been allowed to operate since Toronto entered stage two of the province’s reopening plan on June 24 but there has been come confusion around whether patios with a roof are permitted.

On Friday, the province announced that it is amending the emergency order to “to clarify that outdoor dining areas can open if they have a roof, canopy, tent, awning or other covering.”

The province said that in order to qualify as an outdoor dining area, at least two sides of the space must be open to the outdoors.

That means that restaurants with large garage doors that open to the outdoors remain limited to take out only for now.

The province also announced on Friday that it is issuing another emergency order to help municipalities quickly pass the temporary bylaws needed to allow for the creation of new patios and the expansion of existing ones.

The province said that in doing so it will help reduce the delay for the approval of new and expanded patios from “several weeks or more” to “a matter of days.”

The City of Toronto has already announced its own program to streamline the process for approving new and expanded patios and has said that it has approved more than 400 applications so far.

"Businesses across the province are demonstrating that we can still enjoy our beautiful Ontario summer while protecting the health and safety of their patrons," Premier Doug Ford said in a press release announcing the new emergency order. "Restaurants and bars are an important part of our economy, and a great driver of employment. I am proud to say that we will continue to support them as our province reopens and recovers."