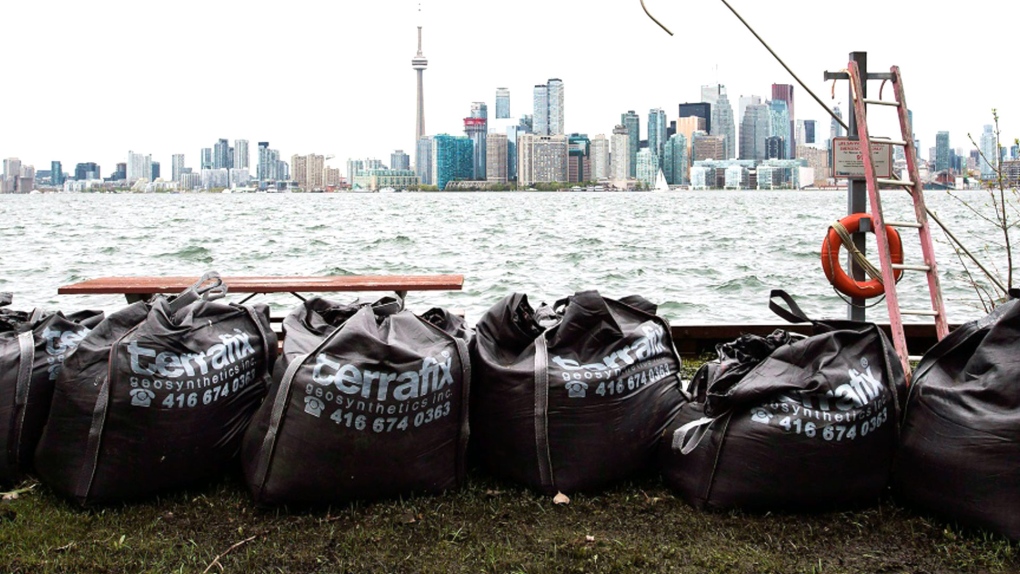 Sand bags keep water from flooding the land more as the Toronto Islands are threatened by rising water levels in Toronto on May 19, 2017. (The Canadian Press / Nathan Denette)

TORONTO -- Ontario's special adviser on flooding is recommending dozens of ways the province can improve its response and resiliency to floods, but the government isn't saying if it will commit more funding to implement them.

Heavy rains, melting snow and a sudden temperature increase led to flooding across the province, with 23 municipalities and one First Nation making emergency declarations, McNeil said in a report.

His recommendations include changes to floodplain mapping, better communications, and making more money available to municipalities through a disaster assistance recovery program.

Natural Resources Minister John Yakabuski said he will be reviewing the recommendations and hoped some can be implemented before spring 2020, including those about communications.

“The flooding that impacted Ontario earlier this year was the result of extreme weather and there's a strong possibility that we will face similar circumstances in the future,” Yakabuski said. “As Mr. McNeil points out in his report, we can't prevent flooding. We can only become more resilient to it.”

Yakabuski was non-committal about increasing funding to implement McNeil's 66 recommendations.

“That's a discussion that we'll have to have on a multi-ministry basis, on a cabinet basis,” he said.

Earlier this year, the Progressive Conservative government of Premier Doug Ford cut conservation authorities' funding for flood management in half.

Since then, the government has launched a $1 million pilot project to help municipalities rebuild damaged infrastructure. It also announced a multi-year study to assess the impacts of climate change, and on Thursday it announced an advisory panel on climate change.

But critics lamented that Yakabuski, in discussing McNeil's report Thursday, referred only to extreme weather events, not climate change.

“Everything contained in this report is a result of the climate crisis we're facing,” Green party Leader Mike Schreiner said. “Unfortunately, over the past year-and-a-half, the Ford government has reversed almost every ounce of climate mitigation that Ontario had in place.”

The Tories have scrapped Ontario's cap-and-trade system to reduce greenhouse gas emissions, eliminating various green programs that were funded by it, eliminated the province's environmental commissioner, and cancelled a program to plant 50 million trees.

NDP critic Ian Arthur said that while Yakabuski didn't say the words climate change, the minister stressed the phrase “shared responsibility,” suggesting the province will be looking to Ottawa to come up with money.

This report by The Canadian Press was first published Nov. 27, 2019.