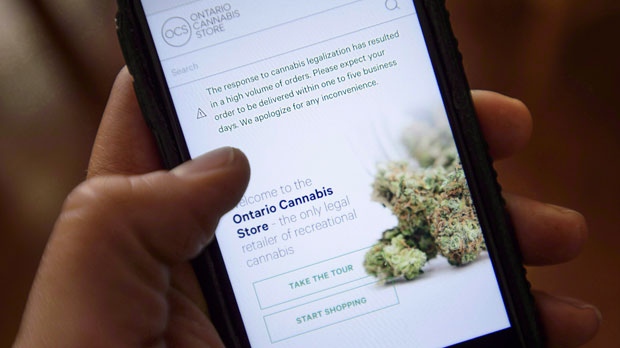 The Ontario Cannabis Store website is pictured on a mobile phone Ottawa on Thursday, Oct. 18, 2018. THE CANADIAN PRESS/Sean Kilpatrick

TORONTO -- Ontarians shelled out almost $20 million in the first three months that edibles and other products in Canada's second wave of legalization were available for sale -- and experts believe that number will only grow.

Cannabis vapes, topicals, concentrates and edibles such as gummies and chocolates hit store shelves in January with beverages following in March, but roughly $19.3 million worth of those products were sold in Ontario in the 12 months ending at March 2020.

The province's distributor, the Ontario Cannabis Store, said vapes were the most popular products in the second wave of legalization, known as Cannabis 2.0. About $14.8 million worth of vapes were sold in the first three months they were available.

The data was revealed in a new report the OCS published this week to offer a glimpse at the country's first full year of legal cannabis operations, which saw 35 tonnes or $385 million worth of cannabis sold during that time.

"Cannabis 2.0 products that launched into the market in Q4 sold very well, but similar to the launch of legalization, the offering from licensed producers was initially fairly narrow." the report said.

"The data demonstrates consumer enthusiasm, but it will likely take some time for identifiable trends to emerge."

Demand outpaced supply and several of the new products sold out within minutes.

"We have yet to see the full potential of edibles, and frankly, all 2.0 product categories due to limitations in supply and dosage," Mimi Lam, the chief executive and co-founder of Ottawa-based cannabis store Superette said in an email to The Canadian Press.

When looking at all of the 2.0 products, Lam said edibles look like the "clear winner," but it's hard to get a full picture of the rollout because the number of products in each category and their availability have dramatically varied.

"For example, the jump between January, February and March for edibles can be accounted for by simply availability," she said.

"Currently the market still only has a limited amount of chocolates and chewables, none of which are consistently in supply."

Lisa Campbell, chief executive at cannabis sales and marketing company Mercari Agency, called the OCS data "impressive," but cautioned against drawing conclusions from it because the 2.0 products are so new.

"The products are limited in availability so whatever is on the market will sell, so it doesn't necessarily signify larger brand trends in 2.0," she said.

A lot of the beverages online launched, after the report was done, she said.

There are lots of chocolates, cookies and gummies, but still so many other edible categories to explore and more brands to get into topicals and seeds, she added.

She expects numbers to rise when the OCS accounts for the first full year of 2.0 sales.

"A lot of licensed producers are just finalizing their beverages," she said.

"You're definitely going to see a surge of diversity in products."