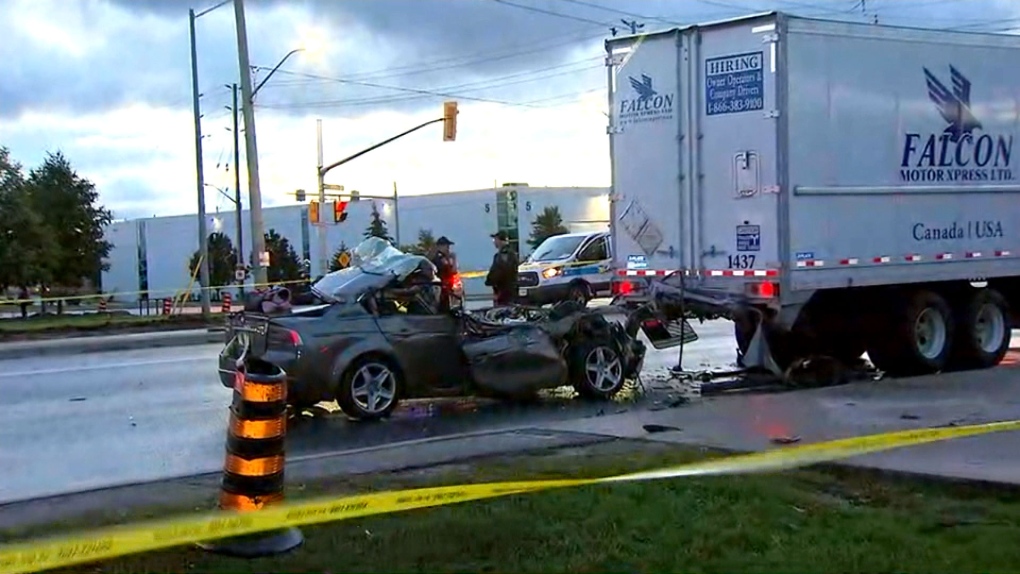 A rear-end collision on Airport Road in Brampton left one person dead on October 24, 2017.

One person is dead after a car collided with a tractor-trailer in Brampton early this morning.

Police say an Acura was headed southbound on Airport Road shortly before 5:30 a.m. when it rear-ended a transport truck, which was stopped at Intermodal Drive at a red light.

The male driver of the car was pronounced dead following the collision and police say he was the lone occupant of the vehicle.

The victim’s name and age have not yet been released as police are still working to notify next-of-kin.

The coroner and Peel Regional Police's collision reconstruction unit are on scene looking into the cause of the deadly crash.

"As you can see it is significant damage, pretty destructive," Sgt. Josh Colley said.

"Speed will definitely be one of the things that the investigators will be looking at as well as any road conditions and anything else they can find out in the investigation."

Police are also asking anyone who may have witnessed the collision to come forward.

“If anyone has seen the incident take place, might have some dashboard or any other video footage available, please contact the major collision bureau with that information,” Const. Lori Murphy told CP24 early Tuesday morning.

Roads are shut down in the area for the police investigation.