One person dead, at least four others injured after multi-vehicle crash in Hamilton 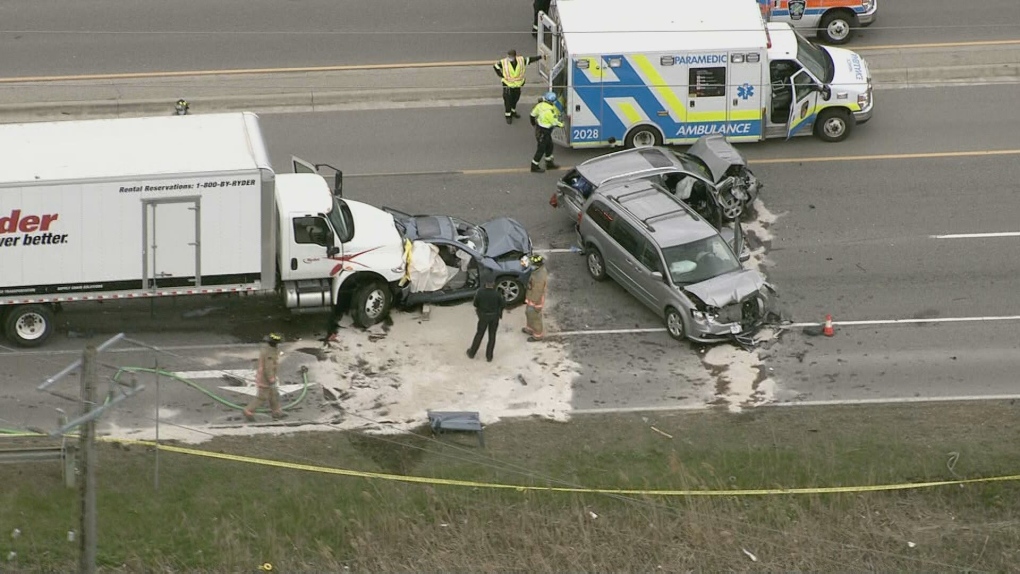 At least four vehicles were involved in a collision in Hamilton, Ont. on May 5. (CTV News Toronto)

TORONTO -- One person is dead and at least four other people are injured after a multi-vehicle crash in Hamilton, Ont.

Hamilton police said they were called to Highway 6, between Edgewood Road and the 8th Concession, just before 1 p.m.

One person was pronounced dead on scene, while two others, including a woman in her 30s, were taken to hospital with critical injuries.

Two other people were taken to hospital with non-life threatening injuries, paramedics said.

Three other people were also being treated at the scene but did not go to hospital, paramedics said.

Authorities said Wednesday evening that the person who died was a 24-year-old Hamilton resident who was sitting in the rear passenger seat of one of the vehicles.

Police say efforts to notify next of kin are ongoing.

"We are still trying to determine exactly what took place here in this collision. It appears to be a rear-end type collision," OPP Sgt. Kerry Schmidt said.

"Currently our collision reconstruction team are on their way. We have members of the Burlington OPP at scene as well speaking to witnesses and involved drivers. If anyone has information please call Burlington OPP and let us know... Obviously we have many questions that need to be answered."

Highway 6 is expected to reopen before 8 p.m., police said.