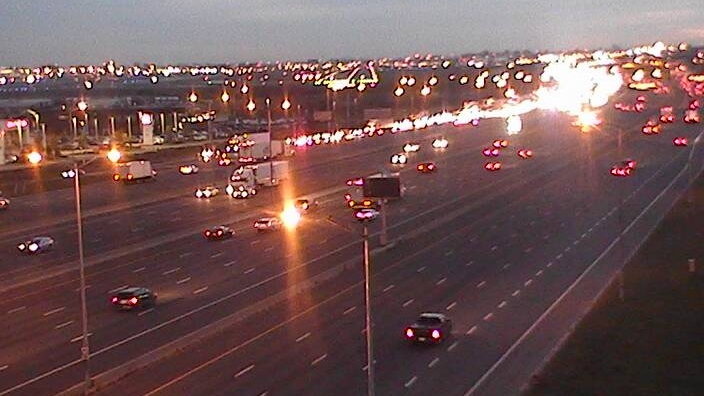 Paramedics say one person has died following a collision on Highway 401 in Mississauga. (MTO)

A Brampton woman is dead after a collision on Highway 401 in Mississauga early Saturday morning.

Ontario Provincial Police (OPP) said it happened on the westbound collectors near Dixie Road at around 4:45 a.m.

OPP Sgt. Kerry Schmidt said there was initially a minor two-vehicle collision, but no one was injured. The drivers involved pulled off to the left shoulder of the highway.

A short time later, a third vehicle approached from the express lanes.

“That driver got out of their vehicle, came over and spoke to the involved drivers on the collector side,” Schmidt said.

As the three drivers were talking, a fourth vehicle travelling in the collector lanes approached and struck two of them, he said.

A 23-year-old woman was pronounced dead at the scene. The other victim was taken to the hospital with minor injuries.

“Obviously a very tragic outcome here when you’re standing on the side of the road here dealing with a minor collision and there’s a fatality as a result,” Schmidt said.

The westbound collector lanes of Highway 401 at Dixie Road have been closed for hours following the collision and are expected to re-open just before noon.

A veteran and former Paralympian told a parliamentary committee that a caseworker from the Veterans Affairs Canada offered her medical assistance in dying, a week after the Veterans Affairs Minister confirmed that at least four other veterans were offered the same thing.