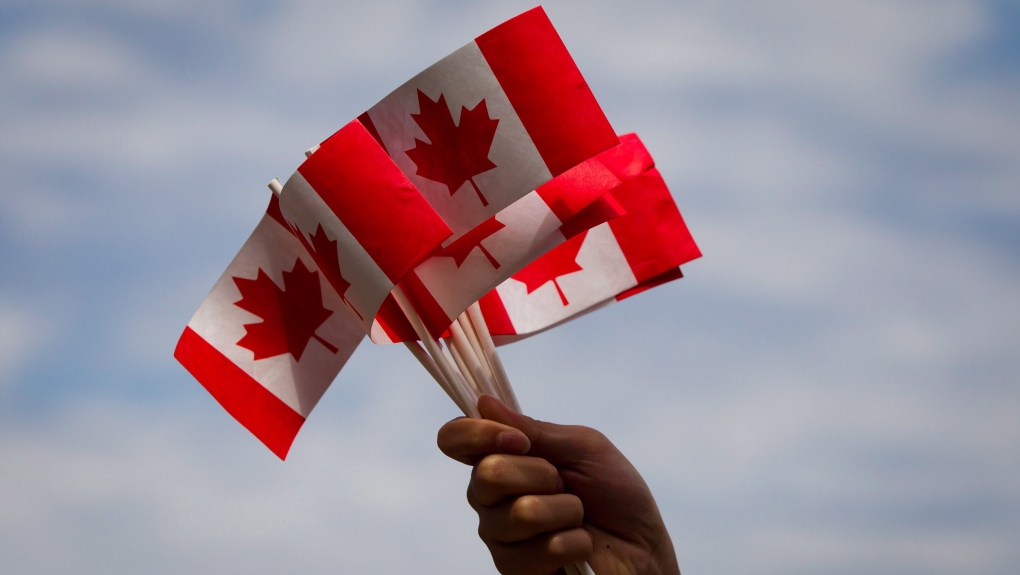 A volunteer waves Canadian flags while handing them out to people during Canada Day festivities on Monday, July 1, 2013. THE CANADIAN PRESS/Darryl Dyck

TORONTO -- In light of the recent discovery of hundreds of children’s remains at residential schools across the nation, some cities in Canada are considering cancelling all July 1 celebrations — and one already has.

On June 10, Victoria, B.C. was the first to announce the cancellation.

“As First Nations mourn, and in light of the challenging moment we are in as a Canadian nation following the discovery of the remains of 215 children at a former Residential School, Council has decided to take the time to explore new possibilities, instead of the previously planned virtual Canada Day broadcast,” Victoria Mayor Lisa Helps said in a statement.

Now, questions are swirling around whether other cities will follow suit — Toronto included.

Dr. Angela Mashford Pringle, an assistant professor of Dalla Lana School of Public Health at the University of Toronto and a member of the Timiskaming First Nation, told CTV News Toronto Tuesday that she feels the holiday is celebrating “colonization and oppression and genocide.”

While she says the celebrations should be cancelled out of respect for the children, she added that there are other serious issues facing Indigenous communities right now that would make a July 1 celebration inappropriate.

“I think there are a few things that are different [this year]. First, the pandemic, while we had it last year, it is actually hitting First Nations and Metis communities, specifically remote ones, much harder right now … We've also had the Inquiry for the Murdered and Missing Indigenous Women and the subsequent lack of response from government,” Pringle said.

“And the fact that we have a number of First Nations who don't have clean drinking water, that we have inadequate housing and that we've got overcrowding in the houses that we do have,” she continued.

When reached for comment, the City of Toronto said that, last week, Council recommitted to and approved taking further action to support truth, justice, and reconciliation.

The city reiterated that it had indeed cancelled in-person Canada Day celebrations this year, due to COVID-19 concerns.

“As in past years, the City will announce details of its (now virtual) Canada Day programming closer to the date,” Deborah Blackstone, spokesperson for the City of Toronto, told CTV News Toronto.

Nelson Wiseman, Director of Canadian Studies at the University of Toronto, said he doesn’t understand what the significance of cancelling the holiday would be.

“For most people, Canada Day is simply a day off work. The overwhelming majority of Canadians do not celebrate any of our holidays. They celebrate the fact that they're not working. Overall, very few people actually go out to celebrate,” Wiseman told CTV News Toronto Wednesday.

“Why don't [they] pick Christmas? After all, it was a Christian denomination that ran these institutions.”

“ My father, sister and I are Métis. We will not be celebrating Canada Day as it’s a celebration on the Indigenous, Inuit and Métis genocide,” Schrader said Tuesday. “My great grandfather was a survivor of the Residential school system. He was forced to attend the Spanish River Residential School. I don’t see what we have to celebrate when this country literally has the blood of Métis, Indigenous and Inuit communities on their hands.”

“My mum, half-brother and niece all bought orange shirts and we will all wear them on Canada Day. We do this to honour our ancestors and our cousins,” she continued.

When asked what a reformed Canada Day could look like, Pringle offered her own suggestion.