A former employee of an Ontario long-term care facility who was fired after a hidden camera installed in a resident's room captured video of apparent neglect and abuse is fighting to get her job back.

Peggy Perrault was one of four employees who were fired from St. Joseph's at Fleming, a long-term care home in Peterborough, Ont., after footage from a hidden camera installed by a resident's son went public in May 2013. Since that time, two of the employees have had their jobs reinstated, and Perrault is hoping she will also get her job back.

On Monday, Perrault appeared at an arbitration hearing at a Holiday Inn in Peterborough. The hearing was also attended by Camille Parent, the concerned son who installed the hidden camera in his mother’s room. He was called to testify about the video he shot over a three-week period.

"This has just been a nightmare," Parent told CTV Toronto on Monday. "It brings everything back."

In the video, staff members are seen mistreating Parent's mother, Hellen MacDonald, who suffers from dementia.

Parent planted the hidden camera in his mother's room after multiple incidents that he found suspicious. In 2012, she sustained a black eye for reasons still unknown to the family.

In the video footage captured by Parent, a worker is seen waving a feces-covered rag in MacDonald’s face. Perrault is the employee accused of doing that.

In another clip, a staff member is seen blowing his nose in MacDonald's sheet before proceeding to make up her bed with the soiled linen. That employee returned to work earlier this year.

"The man who blew his nose on my mother's sheet was actually put in my mother's ward," Parent said. "If this was a child-care centre, these people would be gone. There wouldn’t be a hearing."

The other employee who has also had their job reinstated is seen in the video allegedly groping another co-worker in an elderly patient’s room.

Monday's arbitration hearing was closed to the media after requests for privacy by the nursing home’s lawyer.

Perrault also declined to comment when asked about the hearing by CTV Toronto.

Parent says despite what happened to his mother, the abuse of seniors in nursing homes is not taken seriously. None of the four staff members alleged to have been involved with the incidents were charged.

"If we were that concerned about senior abuse, this should be in a real court of law, not a Holiday Inn. This is just a joke."

At the time, the video sparked a formal internal investigation by St. Joseph’s and another by Ontario’s Ministry of Health. But police and a Crown attorney told Parent nearly a year ago that they would not be laying any charges.

A W5 investigation last year discovered that in just one year, more than 10,000 seniors suffered abuse in nursing homes across Canada.

With a report from CTV Toronto's Janice Golding 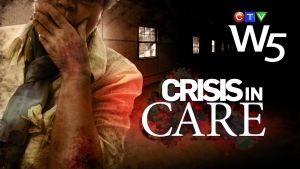