No criminal charges laid in fatal shooting during standoff at Vaughan bank: SIU 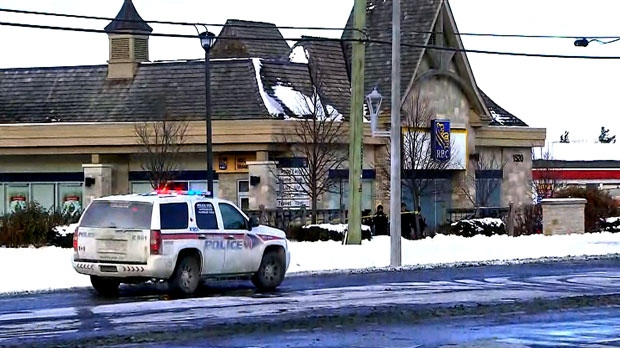 The outside of a RBC branch located in the area of Dufferin Street and Major Mackenzie Drive West is seen.

No criminal charges will be laid in connection with the police-involved fatal shooting of a 25-year-old man who walked into a Vaughan bank appearing to be armed with a handgun last year, announcing he had explosives attached to his body and in a backpack he was carrying.

After an investigation into the incident was conducted, the province’s police watchdog determined “there are no reasonable grounds to lay criminal charges against any York Regional Police officer in relation to the death.”

The investigation, which was detailed thoroughly in a report released by the Special Investigations Unit (SIU) on Friday, included interviews with 13 witnesses – the three customers and ten bank employees inside the RBC branch located in the area of Dufferin Street and Major Mackenzie Drive West at the time.

The report said the man walked into the bank on Dec. 13, 2017 at around 1 p.m. through the front doors “brandishing what appeared to bank personnel and customers to be a semi-automatic handgun.”

“He was carrying a backpack style bag and alerted the bank occupants that he had explosives in the bag and attached to his body,” according to the report. “(The suspect) ordered everyone in the bank to get down on the floor. (The suspect) pointed the handgun at the face of a customer who was about to enter the bank through the same main doors and ordered him to leave.”

The suspect then locked the front doors with a bicycle cable lock, the report said.

“(The suspect) pointed his handgun at a bank employee and ordered her to tie up the other employees and bank customers with the zip ties that he had brought into the bank with him,” according to the report.

The SIU said the suspect then ordered a customer inside the bank to call 911and demand police bring “a quantity of best-quality crystal meth to the bank and put the United States’ President Donald Trump on the telephone with him.”

If they did not comply, “he would detonate his body-worn explosives and the explosives in the backpack, thus killing all of the hostages and himself,” the SIU said.

The report detailed the 911 call, which lasted two minutes and six seconds. The bank customer and the suspect made the request and provided their location during the phone call and when asked to clarify, the suspect took the phone and hung up.

Fifty-nine officers responded to the scene.

While the hostage situation was taking place, officers armed with sniper rifles gained “discrete entry into the bank through a secondary door that had not been detected and secured by the suspect,” the SIU said.

The SIU said it was later discovered that the suspect was armed with a pellet pistol made to look like a Colt M1911 .45 calibre handgun and the supposed explosive device on his person and in his backpack was made of plumbing materials, plastic and electronic components with harmless circuit-free wires, which was not known to any of the responding officers or hostages at the time.

A post-mortem examination determined the suspect’s cause of death to be gunshots wounds to the head. He was struck twice by police bullets.

The report outlined the suspect’s medical history, which included a “incompletely characterized psychosis identified in 2015 that was proposed in an emergency department psychiatric consultation as schizophrenia on the basis of a three-year history of increasing auditory hallucination and delusions of reference.”

“(The medical history report) indicated that (the suspect’s) suspected psychosis could be characterized as a significant contributing factor to his death, as it might have affected (the suspect’s) judgment, including his decisions about threatening and taking hostages at a bank.”

The SIU said “definitive characterization and diagnosis of psychosis was not made.”

The director’s report was released to the public as per the direction of the Attorney General.

The SIU is an arm’s length agency that investigates whenever police are involved in a death, serious injury or allegations of sexual assault.