TORONTO -- Public health officials say nine residents of a long-term care home in Bobcaygeon have died following an outbreak of the novel coronavirus at the facility.

The Haliburton, Kawartha, Pine Ridge District Health Unit said the residents lived at Pinecrest Nursing Home and passed away after a respiratory outbreak was declared at the facility on March 18.

Officials said three residents and 24 staff members have tested positive for the virus but testing has not been conducted on another 35 residents who experienced symptoms following the outbreak.

Dr. Lynn Noseworthy, the medical officer of health for the local public health unit, said last week that additional tests were not conducted because they “already had confirmation that the virus was in the home.”

“This outbreak of COVID-19 is currently the largest outbreak in the province and really brings home how devastating and deadly this virus can be for older people in our communities,” Noseworthy said.

“I am asking everyone to do everything they can to stop the spread of this virus – if not to protect yourself but to protect others who need our care.”

Public health officials say of the 33 cases of COVID-19 in the City of Kawartha Lakes, 27 are related to the long-term care facility.

Dr. Michelle Snarr, the medical director of Pinecrest Nursing Home, told CTV News Monday that in addition to the nine residents who have passed away, the wife of a resident at the nursing home has also died of the virus.

“It’s overwhelmingly sad,” Snarr said in an interview with CTV News. “Once we heard it was COVID, we all knew it was going to run like wildfire through the facility.”

Snarr said she sent a message to the families of the residents earlier this month to inform them of the grim situation.

“The reason I sent the email was to give them a heads up that this is not normal times,” she said.

“Under normal times, we would send people to the hospital if that was the family’s wishes, but we knew that was not going to be possible knowing that so many people were going to all get sick at once and also knowing the only way to save a life from COVID is with a ventilator and to put a frail, elderly person on a ventilator, that’s cruel.”

“Every day you are on a ventilator, you lose muscle mass, you lose weight. The longer this goes on, you are going to develop bedsores,” she noted.

“Dementia is permanently worsened by even something as simple as a regular pneumonia…to endure that… their quality of life after would just be abysmal.”

Snarr said she believes there will be more fatalities related to the outbreak.

"Not all the residents are sick, which makes me hopeful," she said. "But certainly we are going to lose more."

'This is truly a horrible time,' administrator says

In a news release issued last week, the local public health unit said after the outbreak was declared, staff followed “all proper procedures” to contain the virus.

Sick staff went into self-isolation at home and arrangements were made for them to be tested for the virus, officials said.

Residents were isolated, all group activities were suspended, meals were no longer served to residents in the dining room, and the facility was closed to visitors. 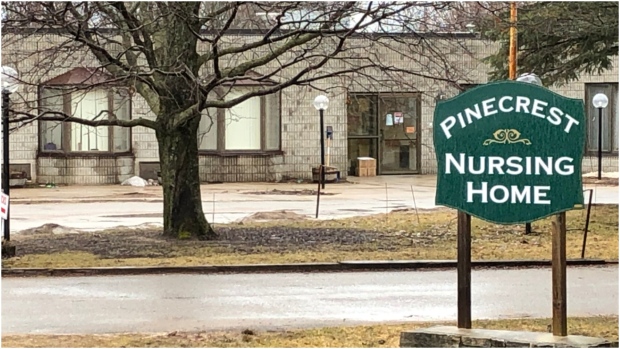 Staff who were asymptomatic began wearing protective equipment, but officials say given the incubation period of COVID-19, many employees and residents were likely already infected with the virus.

“This is truly a horrible time for the families and friends of the residents, as well as our staff,” Mary Carr, the administrator of Pinecrest Nursing Home, said in the news release.

“We have a number of medically fragile and vulnerable people living in our home; our residents are like family to our staff. Our sympathies go out to all of the families and friends of the people we have lost.”

In an updated statement sent out Monday, Carr said the facility is “working closely” with their local public health unit and the province to limit the spread of the virus.

“Our team members are dedicated professionals, trained in infection, prevention and control strategies and they will continue to focus on keeping our residents, families and team members safe,” Carr’s written statement read.

“We actively monitor and screen our residents to determine if they are showing any of the related symptoms and take necessary precautions if they do. We also actively screen all our team members every time they enter our building, and they are encouraged to self-monitor at home and are not permitted to come to work if they are feeling unwell.”

Only “essential visitors” have been permitted in the building, she added.

“Our residents and staff have shown incredible resilience during this difficult time and we truly appreciate the support we have received from the community,” Carr said.

Jessica Echeverri, whose grandmother is a Pinecrest resident, posted about the outbreak on Facebook, saying that her family is “devastated by this illness.”

“This tragedy will haunt the community forever. There are many loved and respected people who live there,” she wrote.

“The public may look at this case and think that these residents contracted this terrible virus because of their age, which may be true, but I urge them to consider if they would want to be the person who gave it to someone there, directly or indirectly.”

Speaking at a news conference on Monday, Merrilee Fullerton, Ontario’s minister of long-term care, called the outbreak in Bobcaygeon “tragic.”

“My heart is going out to everyone that has been affected by this,” she said. “We are looking to learn as much as we can about what unfolded in Bobcaygeon."

On Mar. 30, 2020 Pinecrest Nursing Home and The Haliburton, Kawartha, Pine Ridge District Health Unit released conflicting information about the number of people who died at the facility. Initially saying nine people had died, then adjusting the number to seven. An update from the public health unit in the afternoon clarified that the initial number of dead was, in fact, correct.