Layers of real and fake paperwork that likely followed a Canadian car from where it was stolen in Ontario to where it was found on a used car lot in Nigeria make it almost impossible to prosecute the dealer for knowingly selling a stolen car, police in the African nation say.

The car, now sitting in a suburb of Lagos, near a maximum-security prison, could not prompt an investigation on its own, as the theft didn’t happen within Nigeria, said SP Benjamin Hundeyin from the police public relations office for Lagos State Command.

Moreover, while it is possible for the police forces to co-ordinate via Interpol, Hundeyin said his agency has not received a request — making prosecution difficult, he said.

“If he went to customs and this was cleared, and it came with a bill of landing and other documents, nothing would be on him. Nothing. He would get off scot-free,” said Hundeyin.

It’s a situation that one Toronto city councillor says makes it important to catch the cars and prosecute the thieves here in Canada.

He is now calling for a provincial or national task force in the wake of a CTV News Toronto Investigation that tracked a car belonging to Ahmad Abdallah to Lagos, Nigeria, more than 9,000 kilometres away from where it was taken.

“This auto theft plague doesn’t recognize municipal boundaries,” Councillor Mike Colle said. “These cars are stolen off your front lawn in Toronto. They end up on a trailer in Brampton. Before you know it, they’re off.”

The 9,000-kilometre journey from Ontario to Nigeria often starts with cars stolen off driveways, and then through Canada’s ports, where police and border guards are seizing more stolen cars. 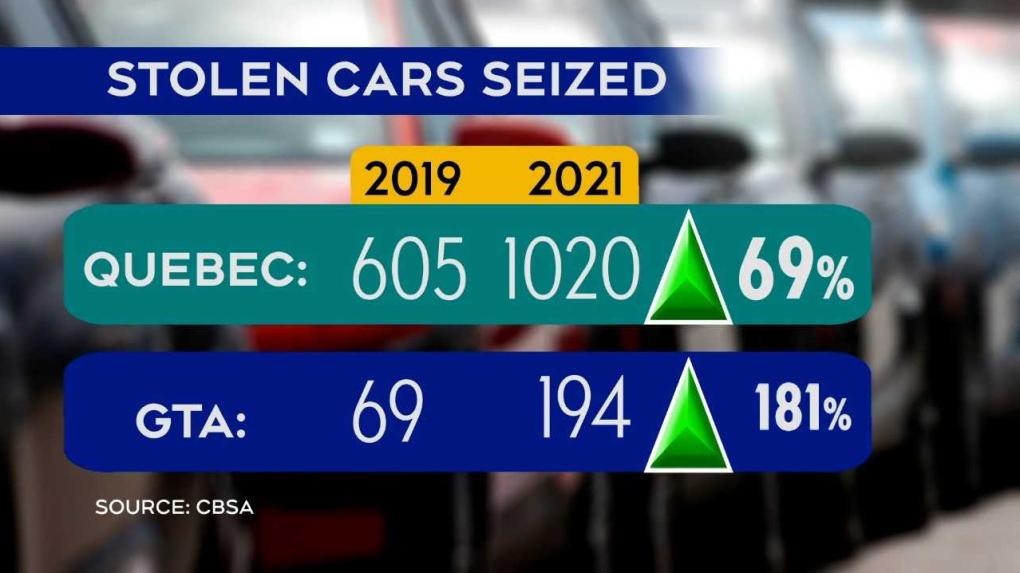 “It is on the radar that it is busier than ever,” said Mark Weber, the national president of the Immigration and Customs Union. “I think you’re dead on when you say that it is a problem.”

Law enforcement busts are making a dent, as GTA police return tens of millions of dollars worth of stolen cars.

For example, the Toronto Police Service charged seven people in Project Taurus, alleging the suspects were also responsible for at least 28 carjackings.

“Very scary. These are not just casual criminals. This is organized crime that’s dealing with a multi-billion dollar industry,” Colle said.

The TPS is now devoting $2.3 million to re-start a new task force devoted to cracking down on auto theft. That’s after Toronto City Council requested it re-establish the unit in a motion in December.

The motion called for a provincial task force and for national resources to be expended as well.

The Canadian Border Services Agency said in a statement that its border services officers “work on a daily basis with police forces, including the RCMP and local police, as well as the Insurance Bureau of Canada.”

“We are always working to improve not only our relationships, but also our collective intelligence and law enforcement capabilities, operations, and successes,” the statement said.

A statement from the BC office of Solicitor General highlighted a $61 million investment in automatic license plate recognition technology and $72 million to the Toronto Police Service.

“We trust the TPS to apply resources and expertise to tackle this growing problem and we will continue to work with all law enforcement agencies across the province to keep Ontario safe,” the statement says.

Torched forests and cities burned to the ground. Colleagues with severed limbs. Bombardments so relentless the only option is to lie in a trench, wait and pray. Ukrainian soldiers returning from the front lines in eastern Ukraine’s Donbas region — where Russia is waging a fierce offensive — describe life during what has turned into a gruelling war of attrition as apocalyptic.