For the first time in its 16-year history, Porter Airlines will be flying commercial jets out of Toronto Pearson International Airport.

The flights will connect Toronto with Vancouver, Ottawa and Montreal starting in February 2023, with the airline promising an “enjoyable economy air travel for every passenger.”

Porter says there will be multiple, non-stop flights to these three locations every day, with the price ranging from about $225 to $248 for a round trip.

“Porter’s introduction of the E195-E2 provides the ability to operate throughout North America, including the west coast, better positioning us to serve the needs of many more business and leisure passengers,” Michael Deluce, president and CEO of Porter Airlines, said in a statement. “This investment introduces a new level of thoughtful service, unmatched by any other airline in North America. It will change the way passengers think about flying economy.”

The aircrafts being used for these flights are 132-seat Embraer E195-E2 commercial jets, which according to the airline are quieter and more fuel efficient than other aircrafts of similar size. It also claims to be the only airline whose two-by-two configuration means there are no middle seats.

As part of the “new economy experience” at Pearson airport, the airline is promising to offer complimentary beer and wine along with a selection of premium snacks. There will also be free WiFi on all flights, with “fresh meals” on longer trips.

For Porter, this new development marks a significant milestone. This will be the first time the airline will fly out of Pearson International Airport alongside other large airlines like Air Canada, WestJet and Air Transat. 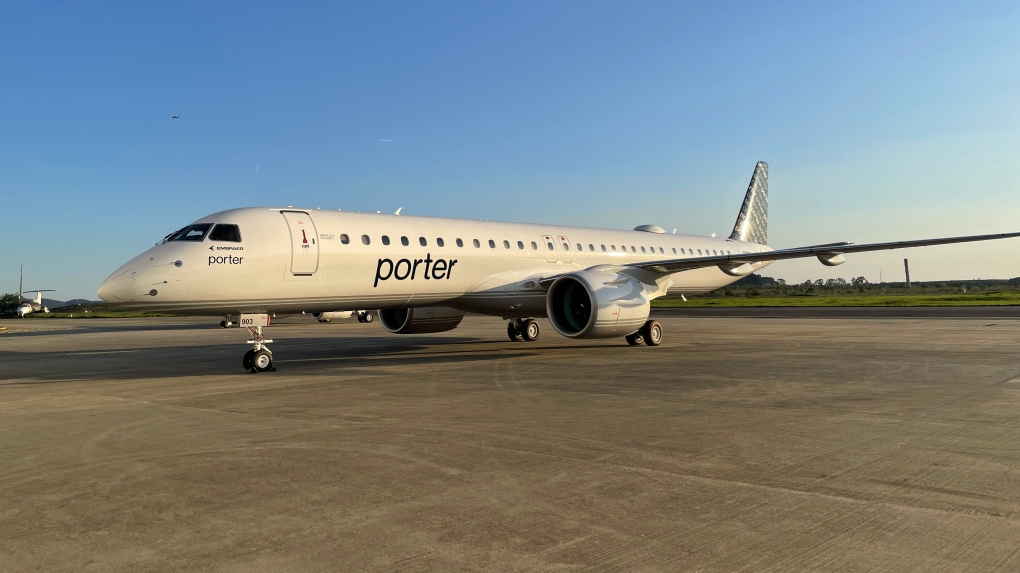 A Porter Airline Embraer E195-E2 commercial jet is seen in this undated photograph provided by the airline.

“As the demand for travel continues to increase, we are happy to have Porter Airlines join us to offer even more options for our passengers.”

You ask, we deliver (you, to where you need to go). Introducing our first routes on our new @Embraer E195 jets! #ActuallyEnjoyEconomy on daily flights between @TorontoPearson, @yvrairport, @yulaeroport, and @FlyYOW, starting Feb. 2023. Visit https://t.co/WbeUwOBOgY for more. pic.twitter.com/47luNAnT82

Prior to this new arrangement, Porter flew exclusively out of Billy Bishop Airport. The airport has an agreement with the city that prevents jets from operating out of the airport due, in part, to a shortened runway.

In 2015 a proposal by Porter Airlines that would have expanded the runway by about 200 metres was turned down.

The first flights to Ottawa and Montreal will begin on Feb. 1, while those wishing to fly to Vancouver will have to wait until Feb. 7.

The airline also hinted that new destinations will be introduced in 2023.