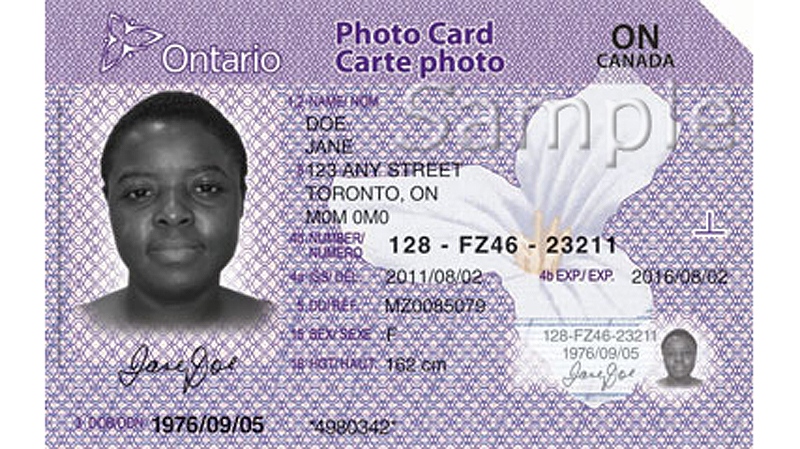 An example on Ontario's new ID card appears in this handout photo.

TORONTO - More than a million people in Ontario who don't have a driver's licence will soon have another option for government-issued identification, but it won't allow them to cross the U.S. border.

After a three-year wait, the province unveiled a new photo card Thursday for residents 16 years old or older who don't drive, but still need a card to prove their identity.

Transportation Minister Kathleen Wynne acknowledged the ID card was a long time coming. Her 55-year-old sister doesn't drive and needs some other form of ID, she said.

The driver's licence is so "engrained" in the way business is done in Canada that it's become a stand-in for photo identification, Wynne said.

"The reality is that there are many people who either choose not to, or do not have a driver's licence," she said. "So simple transactions like opening a bank account, applying for a loan, making a purchase, or simply showing identification in order to be able to vote, becomes complicated."

The purple card, which costs $35 and is valid for five years, won't have any Braille, but it will include raised lettering and a corner cut to make it easier for the visually impaired to find it in their wallet.

The governing Liberals had also promised an enhanced photo ID card that could be used instead of a passport to drive to the United States, but Wynne says the project has been put on hold because it's too costly.

"We were also looking at an enhanced card that would have more features on it, and honestly would have been much more expensive to implement," she said. "And by the time I became minister of transportation, we were in a financial situation where that had become less tenable, and so we were on a track that we're saying, 'We're going to have to put this whole project off."'

However, the government may decide to go ahead with an enhanced card if there's demand for it, she said. Ontario started offering enhanced driver's licences in May 2009 as an alternative to a passport for crossing the border into the U.S. and 39,331 have been issued so far.

Ontario residents will be able to apply for the photo ID card at about 20 Service Ontario centres starting July 25, and at all 300 locations next year, Wynne said.

Applicants must provide original identity documents that prove legal name, date of birth and signature, such as a birth certificate. The government's also working with Elections Ontario to ensure the card can be used to cast a ballot.

All other provinces except Quebec have ID cards for residents who don't drive and Ontario will work with those provinces to find a way to make it transferable, she said.

The New Democrats say they have long supported the project, but question the timing of the announcement, which comes just a few months before the Oct. 6 election.

Susan Eng of the Canadian Association of Retired Persons said the card will not only be helpful to those who are disabled, but seniors too.

She said she recently spoke to an elderly woman who wanted to open a bank account, but had to bring her husband because she didn't have government-issued ID.

It's a "matter of dignity" and independence, Eng said. And it may also help reduce identity theft and discrimination.

"The idea that we can have a dependable government-issued photo card for everybody -- especially the ones who are most vulnerable -- is more important that you would think," she added.

Reuben Cipin, an 83-year-old man who is visually impaired, said he lobbied hard for the card, which he says seemed to take a backseat to the high-tech driver's licences.

"I was afraid that the (photo ID) card was just going to be sitting on the backburner," he said.

The province spent about $6.5 million to produce the enhanced driver's licences, he said.

"And a very small percentage of people opted for it because they had privacy concerns," Cipin said.

Ontario Privacy Commissioner Ann Cavoukian had voiced concerns about the security of citizenship information that's stored on chips that are embedded in the cards because the information is transmitted wirelessly.