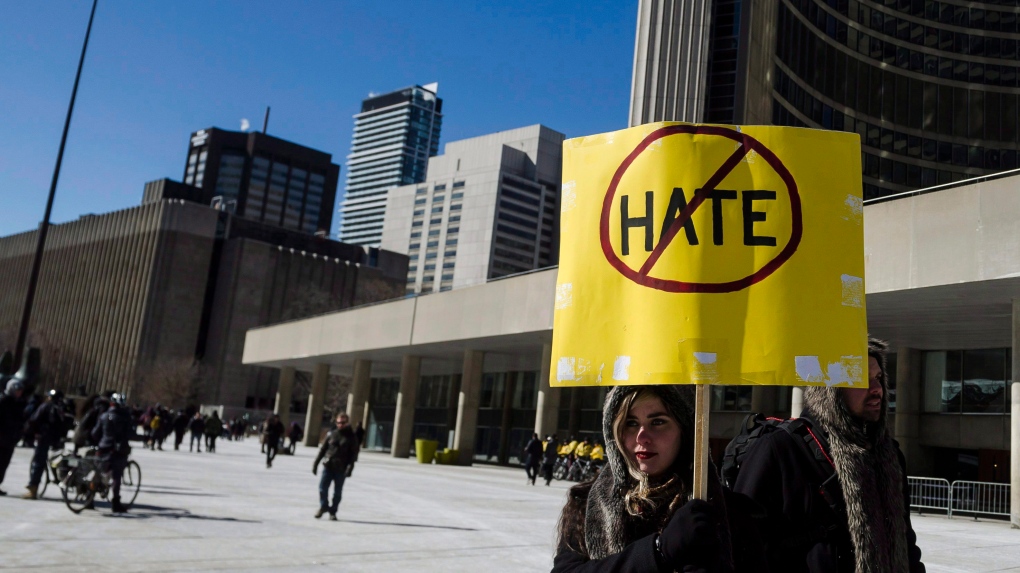 Rogue Benjamin holds an anti-hate sign during a demonstration regarding motion M-103 at Toronto City Hall on Saturday, March 4, 2017. THE CANADIAN PRESS/Christopher Katsarov

Ontario students and teachers now have access to a set of online resources aimed at combating Islamophobia in schools.

The Muslim Association of Canada, a national non-profit organization, launched a website Thursday that features three courses, four workshops and six hours of educational videos to help address anti-Muslim biases that teachers and students may have.

Memona Hossain, a member of the association's team that developed the site, said the resources on offer are important to help schools address Islamophobia.

"This is definitely necessary work," said Hossain, who is also a PhD student at the University of Toronto. "Our hope is that this type of work will inform long-term change, not just short term."

The federal government convened an emergency summit on Islamophobia in July, a few weeks after a Muslim family was run down in London, Ont., in what police have called a targeted and deliberate act. Four members of the family died and a nine-year-old boy was seriously injured.

In recent months, a spate of hate-motivated attacks have targeted hijab-wearing Muslim women in Alberta. In September of last year, a Muslim man was stabbed to death while volunteering at a Toronto mosque.

The Muslim Association of Canada received a $225,000 grant from the Ontario government in June that supported its work on the website, which can be found at islamawareness.ca.

"The outcome of this project far exceeds the original scope and offers very easy access, practical, and concise resources for educators, students, parents and anybody that is willing to address Islamophobia within the sphere of education," Sharaf Sharafeldin, the association's executive director, said in a statement.

"That is why we are investing and partnering with community leaders -- who are leading this effort-- to counter racism and better support Ontario's Muslim students and their families," he said in a statement.

Hossain, who worked on the online platform, said the association used feedback from some of the largest school boards in Ontario to improve the resources on offer.

"We've also been getting some good feedback, hearing that they are ready to use this in their classrooms, that they are sharing this with their colleagues," she added.

"PDSB unequivocally stands against all forms of discrimination and oppression, including Islamophobia," said spokesperson Malon Edwards. "We have taken these actions to ensure equitable and inclusive learning environments and experiences for our students and staff."

Paul Gareau, a Metis assistant professor at the faculty of native studies at the University of Alberta, was also asked to review the new platform and provide his feedback based on his experience in teaching Indigenous perspectives. He said the site tries to dispel myths and misconceptions about Islam.

"That's always the uphill battle for us as Indigenous-studies folks or Indigenous people, that how do you educate people on Indigenous perspective so that we can sort of break these cycles of anti-Indigenous racism. The same can go for the Muslim communities in Canada," he said.

"Things like this, dismantling Islamophobia in school or Islam in education, I think those are good things to to have available."

This report by The Canadian Press was first published Dec. 2, 2021.