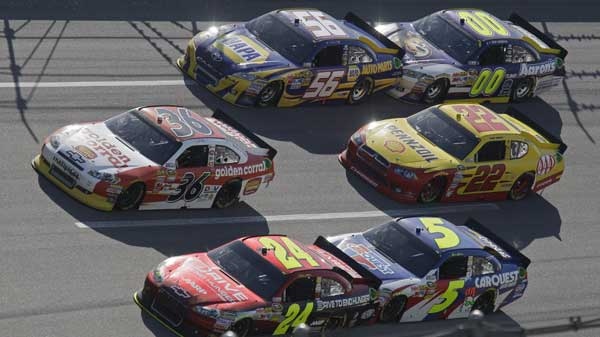 TORONTO - There's a new kid on the block in NASCAR and he's prominently featuring the Maple Leaf.

GoCanada Racing will make its debut this weekend in a Nationwide Series event in Nashville, Tenn. The team is owned by Toronto businessman Steve Meehan and its No. 67 Ford Mustang will be driven by J.R. Fitzpatrick of Cambridge, Ont.

"In Canada, there are seven million NASCAR fans and I think there's a real opportunity for us to reach out and touch those fans and give them a home team to cheer for which is attractive. Also, NASCAR as a sport does a very good job of connecting with its fans so to me it's a very powerful marketing medium for us to be able to build a business around."

The team's moniker and car number both have significant meaning.

The inspiration behind the name was the cheer of "Go Canada" that Canadians have grown accustomed to hearing at sporting events. And the No. 67 corresponds to 1867, the year of Confederation in this country.

Meehan, 46, a self-professed diehard racing fan, jumped into the world of stock-car racing with both feet by acquiring the assets of the Nashville-based Baker Curb Racing team. GoCanada Racing will take participate in 10 to 12 Nationwide events this year, including the NAPA Auto Parts 200 at Montreal's Circuit Gilles Villeneuve in August.

Next season, the expectation is GoCanada Racing will run a split Nationwide and Sprint Cup schedule before becoming a full-time Sprint Cup squad in 2013.

Lofty goals, indeed, given the very competitive nature of NASCAR. But Meehan is certainly used to aiming high.

He founded Investment Planning Counsel -- a firm that boasted $15 billion in assets and more than 1,000 financial planners when it was acquired by IGM Financial in 2004 for $95 million.

But Meehan says make no mistake, he's not involved in racing merely as a hobby.

"For me, this is a business and we'll run it as a business," he said. "Being able to help corporations market to the NASCAR fan is an attractive proposition and if I'm successful at it, that sponsorship is going to continue to fund our program going forward."

However, the business of driving the car into Victory Lane will lie ultimately with Fitzpatrick, a lanky 22-year-old who claimed the CASCAR series title in 2006 at age 18 and was second last year in the NASCAR Canadian Tire Series.

Fitzpatrick, whose initials stand for John Ryan, is no stranger to the Nationwide circuit, having raced in nine events since 2007. He also has competed in 13 NASCAR truck series races as well.

"Being a part of this is obviously very exciting obviously not just for me and Steve but for all Canadian NASCAR fans," Fitzpatrick said. "They all have their favourite driver but hopefully we can give them their own driver to cheer for now."

While Fitzpatrick admits a driver always faces the constant pressure to perform, he's buoyed by Meehan's confidence in him.

"I'm just happy now I have someone who believes in me and is giving me the time and experience throughout this year to get more comfortable with the car," he said. "My background is totally different than what a Nationwide car is like but with a little more time and experience I think we'll be OK.

"It gives a young guy like me time to learn all the tracks I've never been to before. Actually, I think I go to the track now with a little less pressure knowing I have a whole country behind me. That's pretty special."

Meehan said patience remains the key for both the team and its young driver.

"Obviously running a race team you want to have a good guy driving the car and for us in terms of choosing J.R. this is not a one-shot deal, this is a long-term build," he said. "J.R. is a very talented driver but he's also young so I think as our program grows, J.R. is going to grow and I see it as a perfect partnership for us to grow together."

Fitting his long frame into the tight, cramped confines of a stock car is but one of the challenges Fitzpatrick routinely faces. However, he did say his Ford Mustang is custom-fit for him and is surprisingly comfortable, an essential condition considering in the Sprint Series some races cover 500 miles.

The love for speed is one element that certainly drives most stock-car enthusiasts, but when Fitzpatrick isn't on the track, he's most comfortable behind the wheel of his pickup truck.

"I'm six foot four so it's hard for me to sit in a car and be comfortable," he said with a chuckle. "That's why I picked a truck."

The prospect of rubbing paint with such proven NASCAR stars as Jimmy Johnson, Dale Earnhardt Jr., and Kyle Bush could indeed be a daunting one for any young driver. But Fitzpatrick is actually looking forward to meeting up with the circuit's best and picking their brains.

"Obviously those guys race a lot and have a lot of experience," he said. "But I feel I can lean on a lot of them.

"A lot of them are nice guys and I can walk up and ask them for any kind of advice. I'm going to take their experiences and ask any kind of questions I can and hopefully adapt to it."