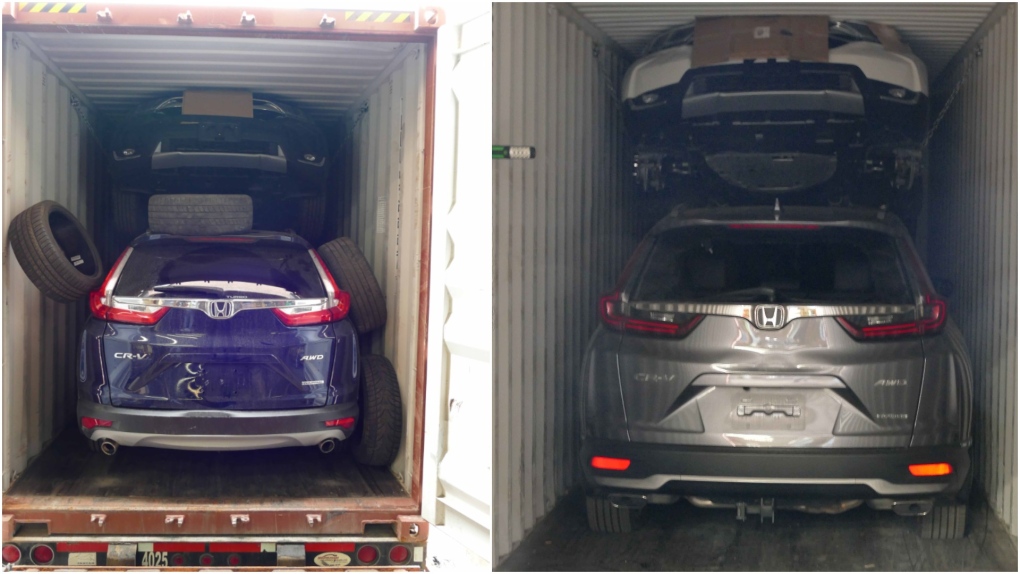 TORONTO -- Police have arrested 11 people and recovered more than 50 stolen vehicles that were allegedly bound for Africa following a months-long investigation into an auto theft ring that was targeting higher-end Honda SUVs.

York Regional Police say that they began an investigation in January after noticing an “emerging trend” in which higher-end Honda CRV’s were being stolen from residential neighbourhoods across the Greater Toronto Area.

The most common vehicle stolen were Honda CRVs from the last three model years but a range of other vehicles were also targeted, including Honda Accords, Toyota Highlanders and Lexus sport utility vehicles.

“They would drive around and pick out the vehicle they were looking for and then they would return between midnight and 5 a.m. and make entry into the vehicle,” McKercher said of the suspects. “They would use what we call a key fob reprogrammer and they could be gone in anywhere from three to five minutes.”

McKercher said that the suspects would often use a screwdriver or other tool to “puncture” a vehicles lock and force their way inside.

He said that they would then use the programming device to access the vehicles on board computer and program a blank key so that it would start the engine.

The vehicle thefts occurred across the GTA but were particularly prevalent in Vaughan, Markham, northern Toronto and Peel Region, he said.

As part of the months-long investigation, police executed a dozen search warrants on residences, commercial units and warehouses with assistance from Toronto police.

Police say that they have since been able to recover 52 stolen vehicles that were travelling through Montreal via rail. The estimated value of those stolen vehicles is $2.1 million.

“These vehicles were meant to be shipped over to Africa,” McKercher said.

The eleven suspects arrested as part of the investigation are facing a range of charges, including theft of a motor vehicle, trafficking in property obtained by crime and possessing an automobile master key.

Police say that their investigation into the ring is ongoing.