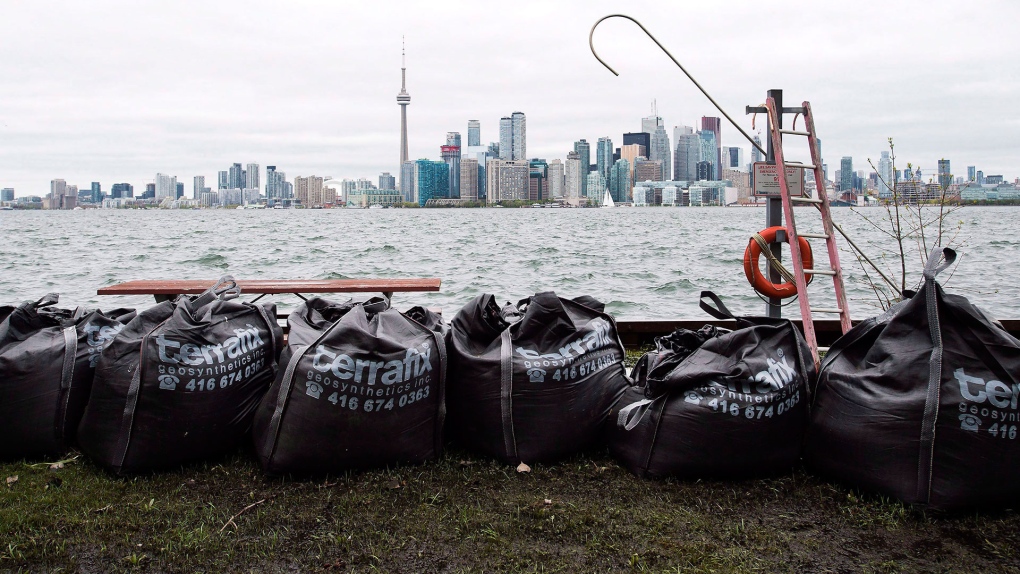 Sand bags keep water from flooding the land more as the Toronto Islands are threatened by rising water levels in Toronto on May 19, 2017. (The Canadian Press / Nathan Denette)

Mayor John Tory says a new investment from the federal government will mean that a total of almost $30 million will be committed toward projects to protect the city's shoreline against the sort of flooding and erosion it has seen over the past couple of years.

"We have the responsibility to do whatever we can to make a difference in terms of our environmental stewardship and our performance in terms of looking after our own environment in the city of Toronto," Tory said, speaking at Humber Bay Park West in Mimico. 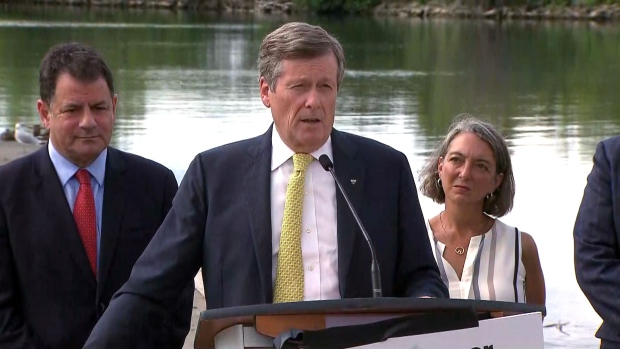 Toronto Mayor John Tory is seen making an announcement about funding for the city's shoreline on August 19, 2019. (CTV News Toronto)

The federal government said Monday that it will provide $11.9 million, while the city is putting in $18 million toward projects to protect the waterfront against the impacts of higher water levels, flooding and shoreline erosion.

"Past flooding events in Toronto have had significant impacts on the economy, the environment and the community. Flood risks continue to significantly impact our community in 2019," Etobicoke-Lakeshore MP James Maloney said at the announcement.

"You all remember 2017 – the flooding we saw here along the shores of Lake Ontario. I remember walking down here and downtown – it looked like a bathtub that was about to overflow. We all thought that was a once-in-a-generation occurrence. Well sadly it's not because 2019 saw water levels that exceeded those of 2017. This is an issue we have to deal with and we have to deal with it now." 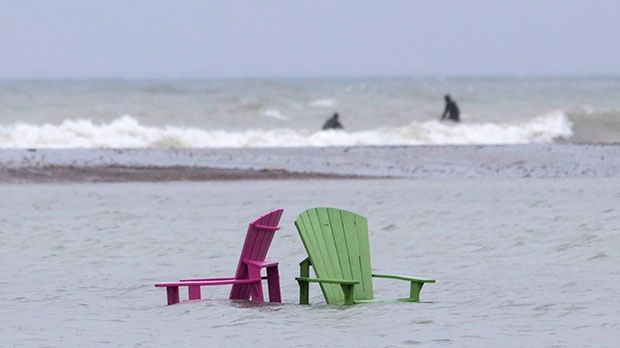 Chairs stand partially submerged on the beach at Toronto's Ashbridges Bay on May 5, 2017 as continuous heavy rain causes flooding issues across the city. (The Canadian Press / Chris Young)

Some 35 different projects will be put in place to protect the shoreline across 17 locations from Scarborough to Etobicoke, Tory said.

One example is the placement of large boulders along areas of the shoreline to help reduce wave action that causes erosion. Trees will also be planted to help mitigate the impact of high water levels along the shoreline.

Another project will elevate some roads on the Toronto islands so that transportation will not be impacted as severely in the event of flooding.

Pleased to join our federal counterparts this morning to announce an additional investment in Toronto’s waterfront. This funding, and the 35 initiatives it encompasses, is key to our city’s ongoing efforts to mitigate future flooding and shoreline erosion. pic.twitter.com/9vaLV74Dr8

Tory said now is the time to make investments so that the city will "have a shoreline and waterfront that people will be enjoying in generations."

He said the projects are about recognizing the reality that "things have changed" when it comes to the environment and the possible impacts of climate change on the city.

Record water levels have been seen in Lake Ontario over the past couple of years, leading to flooding on the Toronto islands and parts of the shoreline.

The projects will be carried out in partnership with the Toronto and Region Conservation Authority (TRCA).

Today, @INFC_eng announced funding to manage the impacts of flooding and storm events on Toronto’s waterfront shoreline. TRCA looks forward to working with @CityofToronto to safeguard people and property from erosion damage. pic.twitter.com/rIti04RZwM

"The funding MP Maloney announced today will directly help maintain TRCA's erosion control infrastructure here in Humber Bay Park and the Humber Bay Shores," TRCA CEO John Mackenzie said. "The funding announced today will also help maintain erosion control structures in Ashbridges Bay, Bluffer's Park, all across the waterfront, protecting these special places for the many residents and visitors that use them."