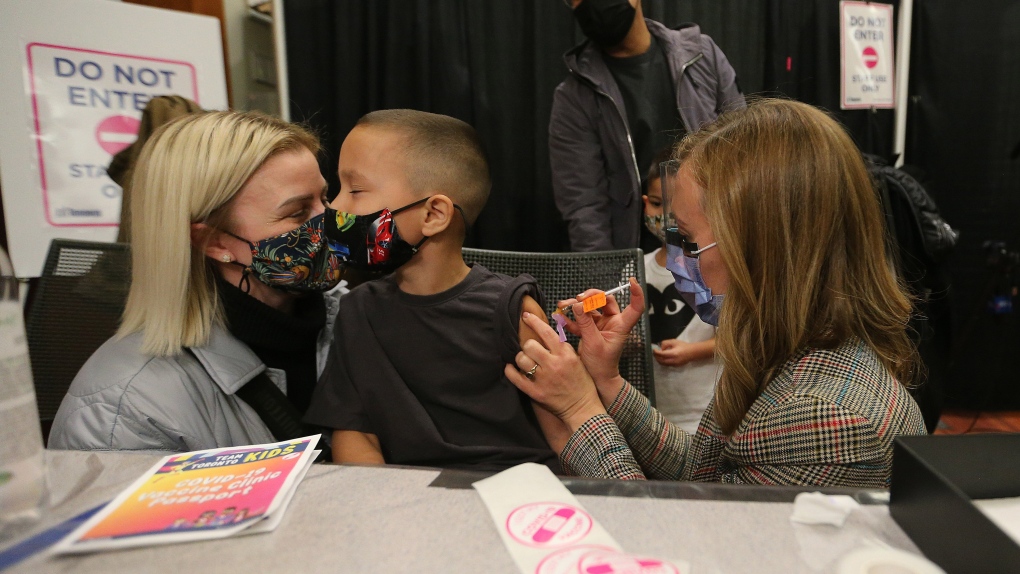 Children who are part of the Hospital for Sick Children family between the ages of 5 and 11 years of age are some of the first to get vaccinated for COVID-19 at the Metro Toronto Convention Centre, in Toronto, Tuesday, Nov. 23, 2021. THE CANADIAN PRESS/Steve Russell, POOL

The city says nearly 30 per cent of all children ages five to 11 in Toronto have now rolled up their sleeves and received their first dose of the COVID-19 vaccine.

In a news release issued Friday, the city said 29 per cent of children in this age cohort have received their first shot and as of 8 a.m. on Dec. 9, 67,300 paediatric doses have been administered in Toronto.

“As of December 9, there have been 146 school-based vaccination clinics held by Team Toronto Kids and Team Toronto to provide vaccines to five- to 11-year-olds in the neighbourhood-focused strategy,” the news release read.

“While it is still early in the vaccination campaign, preliminary data has shown that there have been some positive outcomes for neighbourhoods that were selected as areas of focus, including Taylor Massey, which currently has an uptake rate of 25 per cent for its younger residents in just two weeks.”

According to the city, appointments are still available at all of the five city-run vaccination clinics from now until Dec. 24.

Children can also receive a shot at hospital-run clinics, select pharmacies, and at the upcoming Toronto Kids Vaccine Day at Scotiabank Arena on Sunday from 10 a.m. to 6 p.m.