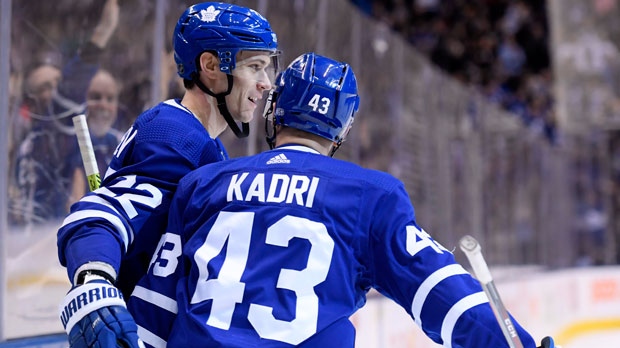 TORONTO -- The jubilant cheers coming from the Maple Leafs' locker-room could have very easily been swapped out for a collective sigh of relief.

Nazem Kadri recorded his fifth-career hat trick as part of a four-point night and Auston Matthews snapped the second-longest goal drought of his career Wednesday as Toronto defeated the free-falling Washington Capitals 6-3.

William Nylander, who came in with just four points in 20 games since the end of his contract impasse, added three assists as the Leafs picked up a much-needed win heading into the NHL all-star break and their league-mandated bye week.

"We wanted this one," Kadri said. "We wanted to feel good about ourselves."

Toronto, which doesn't play again until Feb. 1, had lost two straight, five of six at Scotiabank Arena -- including four in a row -- and seven of its last 10 overall.

"We've felt like we've been trending in the right direction," Kadri added. "It's definitely nice to play a full 60 (minutes) and beat a good team."

Nikita Zaitsev and Mitch Marner, into an empty net, had the other goals for the Leafs (30-17-2), while Morgan Rielly and Connor Brown added two assists each.

"Once we put in that kind of work, we can play with anybody," said Toronto goalie Frederik Andesen, who stopped 41 shots.

Nicklas Backstrom, with a goal and an assist, Alex Ovechkin and Matt Niskanen replied for the Capitals (27-17-6).

Braden Holtby, who had allowed 11 goals on his last 54 shots against before Wednesday, finished with 31 saves. T.J. Oshie added two assists.

Washington lost 8-6 in Chicago on Sunday and 7-6 to San Jose in overtime on Tuesday. The Capitals have given up 21 goals in its last three outings and have been outscored 36-17 during their slide.

Kadri is also the third straight member of the opposition to register a hat trick after Chicago's Jonathan Toews and San Jose's Tomas Hertl.

"We can't give up that number of goals," said head coach Todd Reirden, whose team has eight days to contemplate its latest setback. "We've got to figure out a way to keep the puck out of our net."

With his goal Ovechkin, who is skipping the all-star festivities in San Jose and will have to sit out Washington's game on Feb. 1 as a result, tied Sergei Fedorov for top spot all-time among Russian-born players with 1,179 points.

"It's a big privilege, especially when you played together and you learn a lot from that legend," Ovechkin said. "I'm pretty sure Fed is very happy it's me."

Matthews, who had gone seven straight without a goal and had just one in his last 13, snapped a 2-2 tie with 3:41 left in the second when he ripped his 21st of the season through Holtby's pads on a Toronto man advantage.

The goal was a huge relief for Matthews and for the Leafs' power play, which had gone just 6 for 52 since early December.

"It felt pretty good," said Matthews, who is heading to the all-star game with teammate John Tavares. "Kind of takes your mind off of it a little bit."

Matthews played on line at 5 on 5 with Marner for the first time in their 2 1/2 seasons, something he would like see continue.

"We controlled the play a lot," said Matthews, before adding with a wry grin: "I'm not sure (head coach Mike Babcock) likes it too much, but I enjoy playing with him."

Kadri made it 4-2 with his second of the evening at 2:10 of the third, blasting a one-timer off the rush.

The Toronto centre then completed the hat trick at 10:15. Nylander carried the puck into the zone before dropping it to Brown, whose one-timer went off the crossbar and post before ricocheting to Kadri.

"It wasn't spinning at all or anything," he said. "It was just laid up right on the tee."

The Capitals got one back with 2:46 to play when Niskanen's shot deflected in off a Toronto player, but Marner scored his 20th into an empty net.

After Backstrom and Kadri traded goals late in the first, the Capitals pushed ahead at 3:51 of the second when Ovechkin hammered his league-leading 38th past Andersen.

Washington's captain tops all active NHLers with 38 goals against Toronto despite sitting 11th in games played at 47.

"Sometimes you feel like the puck is a basketball, but on that shot it was more like a golf ball," said Andersen, who made a couple of big stops early and was solid throughout. "He's got a heavy shot and placed it really well."

Toronto woke up after that with a couple of spirited shifts before Zaitsev took a pass from Nylander in the slot at 13:11 and fired his first through a screen.

Nylander had by far his most productive outing of the campaign, accented by a nice backcheck on Ovechkin earlier in the shift that led to his pass to Zaitsev.

"I might not have wanted the break right now," Nylander joked.

Notes: Toronto defenceman Jake Gardiner missed a second straight game with back spasms. ... The Capitals got an early scare when Ovechkin collided with Oshie. Ovechkin stayed down for a few moments before leaving the bench as part of the NHL's concussion protocol, but returned later in the period.