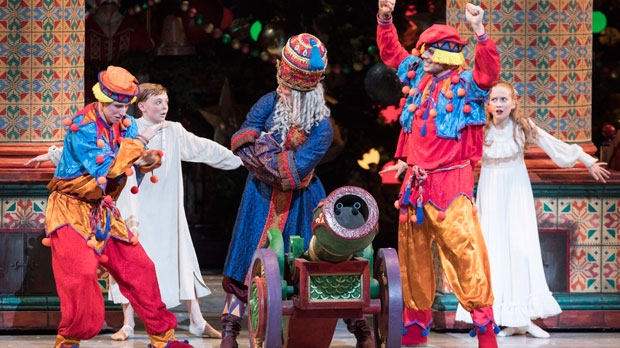 Toronto Maple Leafs Auston Matthews (right) and Mitchell Marner appear as Cannon Dolls in a production of "The Nutcracker" in Toronto on Wednesday December 19, 2018. THE CANADIAN PRESS/Chris Young

TORONTO -- With dreams of the sugar plum fairies almost dashed this year, the National Ballet of Canada has come up with a different way for Canadians to enjoy the tradition of "The Nutcracker."

The ballet company says it's struck a partnership with movie theatre chain Cineplex to screen the perennial favourite at more than 50 cinemas across the country.

The performance will also be made available for digital rental on the Cineplex Store for $29.99, starting on Dec. 4.

This version of "The Nutcracker" was filmed in 2008 at the Four Seasons Centre for the Performing Arts in Toronto.

Students from Toronto high schools and 20 singers from the VIVA! Youth Singers of Toronto joined the ballet for the famous snow scene.

Over the summer, the National Ballet of Canada announced the COVID-19 pandemic had led them to cancel all performances throughout November and December, including its annual production of "The Nutcracker."

Artistic director Karen Kain said this was the first year since 1955 that Toronto audiences wouldn't be able to attend the holiday classic that's set in a winter wonderland in-person.

This report by The Canadian Press was first published Nov. 18, 2020.