TORONTO -- An Etobicoke-based lawyer is under scrutiny for his possible involvement in a number of full-page advertisements under the name Vaughan Working Families, which attacked teachers unions and stood up for the Ford government.

According to a report from the Toronto Star, one of the papers that carried the ad last weekend, invoices for the colour ads were sent to law firm Loopstra Nixon LLP – where Quinto Annibale is a partner.

In April 2018, Annibale incorporated a new business called Vaughan Working Families which billed itself as a “health care advocacy and public relations” firm on behalf of the Vaughan Health Campus of Care (VHCC).

The official address listed for Vaughan Working Families traces back to the same law firm where Annibale is a partner, and where invoices for last week’s ads were reportedly sent. 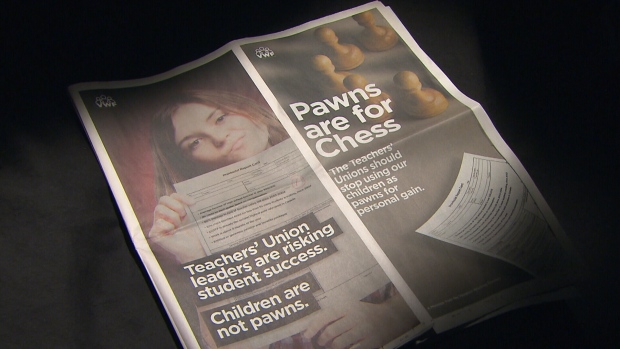 In a statement Friday, Loopstra Nixon confirmed that Annibale “serves on the board of directors” of the Vaughan Working Families “in his personal capacity.”

“No other partner, lawyer or employee of Loopstra Nixon LLP had any knowledge of these advertisements prior to their publication, or made any contribution to the cost of these publications,”

The statement was sent in response to an email CTV News Toronto sent directly to Annibale.

“We regularly act as the legal registered office of organizations who do not have a physical place of business,” the law firm also said in the public statement. “This is a standard practice in the legal industry. It is not uncommon for our firm to receive correspondence on behalf of community organizations and corporate entities who use our firm as their legally registered address.”

The Ontario NDP has written a letter to the province’s chief electoral officer asking for an investigation and claims there is a “disturbingly close” relationship between VHCC, the Progressive Conservative party, and Education Minister Stephen Lecce.

In his letter, Peter Tabuns alleges that Lecce and the chair of VHCC, Michael De Gasperis, worked together during Julian Fantino’s 2010 by-campaign – while Annibale has donated more than $31,000 to the PC Party over the last six years and was appointed by the Ford government as Vice-Chair of the Liquor Control Board of Ontario in 2019.

“Is it difficult to believe that people who worked so closely with Stephen Lecce and Doug Ford’s Progressive Conservative party would keep their plans for an expensive advertising campaign a secret from their long-time allies and friends,” Tabuns letter reads.

CTV News Toronto placed multiple calls and sent emails to De Gasperis, but has not heard back.

In a statement to CTV News Toronto, Minister Lecce’s Office said “the Minister was not involved or aware of the creation of these advertisements.

“The Minister has not spoken to the mentioned individuals in regards to this.”