'My daughter had asked for a bigger one': Toronto man creates massive 14-foot snowman

TORONTO -- Mike Ferguson is no stranger to building snowmen.

Weather permitting, the Toronto man said he’s constructed one every year since 2018. But it’s his latest creation that may be his masterpiece: A 14-footer that would put Frosty to shame.

That’s three whole feet taller than the one he built in 2019. Speaking to CTV News Toronto, he said that the reasoning behind the growth spurt is simple.

“My daughter had asked for a bigger one,” Ferguson said with a chuckle.

As Ferguson explains, his daughter’s life has not been easy and that putting a smile on her face was one of the biggest inspirations to see the project through.

“She’s overcome a lot in her short life already with a medical condition, so it’s great to see her happy and that’s the driving force,” he said.

“I’ll do anything for my daughter. As most fathers would.”

That happiness has spread throughout the Bloor West Village neirghbourhood where the snowman resides. Ferguson said that neighbours and passersby have been going out of their way to offer him thanks and extend compliments on the community’s newest addition.

And although the images of meticulous construction progress posted to the snowman’s own Instagram account would suggest a background in engineering or architecture, Ferguson admits, he just loves building things.

“I create things cognitively, mentally in my mind for my work as a consultant. It’s a childhood joy.”

Ferguson adds that he plans to add a canine companion to the existing display, based on their own family dog, Sammy, once there is enough snow on the ground.

“Sammy is going to be part of the collection. I make a snow dog to accompany the snowman and we just haven’t had enough snow, I barely had enough snow, to this point, to make a strong enough standing snowman. The dog will come soon,” he said.

And with Toronto seeing up to 15 centimetres of snow on Tuesday, it looks like the snowman’s best friend will be arriving sooner rather than later. 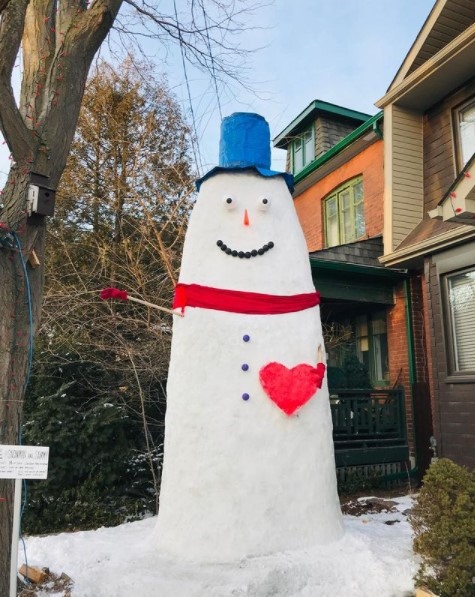