TORONTO -- Ontario MPP Joel Harden will not be kicked out of the New Democratic Party, despite being caught posing for a photograph with a sign that read “F*** Doug Ford.”

Harden told CTV News Toronto that the picture was taken in Ottawa at a healthcare rally Saturday, and admitted to reading the sign before agreeing to take a picture.

“I saw the sign, I saw the writing that was on the sign,” Harden admitted in an interview with CTV News Toronto Wednesday. “It was a bad decision and I apologized for it.”

Harden offered a personal apology to Premier Doug Ford Monday at the provincial legislature, which the premier accepted. 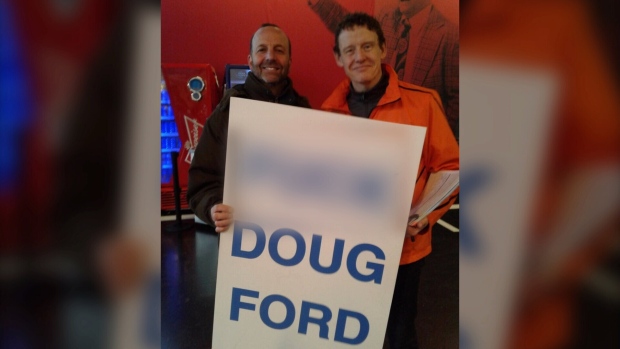 Harden, however, seems to have angered NDP Leader Andrea Horwath who had strong words for the MPP’s actions.

“Although he will remain in our caucus, I will be meeting with him and making it very clear to him what my expectations are of him going forward,” Horwath told reporters Wednesday.

Horwath initially told reporters Tuesday that Harden “didn’t realize” what the sign said before taking the picture, a claim that was later refuted by Harden himself.

When asked whether Harden lied to the party about the incident, Horwath only said that he “did not handle this very well.”

“It has caused great upset, not just for myself as leader, but for our caucus,” Horwath said.

She wouldn’t say whether Harden would be reprimanded for taking the picture.