Motorcyclist dead after colliding with transit bus in Mississauga

TORONTO -- Peel Regional Police say a motorcyclist has died in hospital following a collision with a transit bus in Mississauga.

It happened at approximately 1:39 p.m., according to police, in the area of Mavis Road and Novo Star Drive.

Peel Paramedics say they transported the motorcyclist to hospital with vital signs absent following the collision.

The motorcyclist was pronounced deceased roughly an hour after impact, Duty Insp. Stephen Duivesteyn told reporters at the scene. 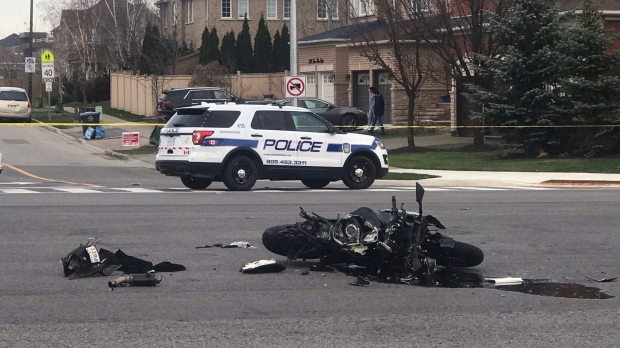 He said that while early in the investigation, it appears that the motorcyclist collided with the bus while it was making a left turn on to Crawford Mill Avenue which resulted in “severe impact.”

Duivesteyn said there were several passengers onboard the bus at the time of the incident but that none of them were injured.

Mavis Road is closed from Derry Road to Highway 401 as the Major Collision Bureau investigates the incident.

No information about the motorcyclist has been released.

COLLISION:
- Area of Mavis Rd/Novo Star Dr #Mississauga
- Collision involving Motorcycle and another vehicle.
- There are injuries, unknown severity at this point
- Mavis Rd to be closed from Derry, south towards Hwy 401
- Large #PRP presence at the scene