TORONTO -- Video has emerged showing a motorcyclist performing dangerous stunts while driving down a road in Markham, Ont.

The incident occurred on Sunday afternoon on Highway 7 near Markham Road. The 36-second video captured the motorcyclist driving at a high rate of speed only on the back wheel of the bike.

"Operating a motorcycle in a careless fashion like that is illegal," York Regional Police Sgt Andy Pattenden told CTV News Toronto on Tuesday.

"It would be a violation of the Highway Traffic Act for either careless driving and/or stunt driving." 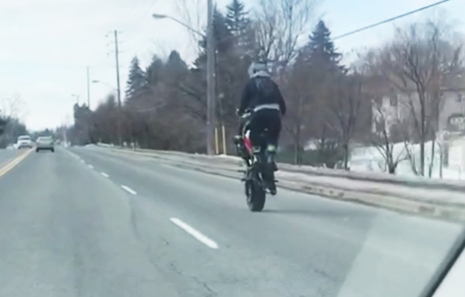 "In the event that the motorcycle crashed causing damage or injury to anyone else, that kind of driving behaviour may warrant a criminal charge of dangerous driving."

Police are asking anyone who witnesses something like this to try and note the licence plate and call police.