A Toronto mother is speaking out after she says she waited in a local hospital’s emergency room for more than eight hours with her sick child before travelling home without care.

“Our systems are so fragile and you don’t actually realize that until you need them,” Jessica Vorstermans told CTV News Toronto over the phone Monday.

Vorstermans said her three-year-old daughter began vomiting so frequently Friday evening that she began to choke.

She called 911 and arrived at Toronto’s Hospital for Sick Children later that night and was triaged by 11 p.m.

The mother said she waited to be seen by a doctor for more than eight hours as her daughter continued to vomit every 20 minutes.

By 7 a.m., Vorstermans said they had still not seen a doctor and she decided to take her daughter home.

“I couldn’t do it anymore… I was exhausted. She was exhausted,” Vorstermans said. She added that if her daughter’s situation had worsened, she planned to take her to an urgent care clinic which was set to open later that morning.

Vorstermans said she doesn’t believe health-care workers are to blame for the poor experience, but that the incident itself is emblematic of the state of health care in Ontario.

“It’s not the heath-care workers' fault. But we aren’t caring for people and our system has been in a boom-bust cycle for so long because of COVID-19… We just have to do something,” she said.

Vorstermans said provincial governments of the past and present have added to Ontario’s health-care woes.

She believes that Bill 124 -- which was introduced by the Ford Government back in 2019 and limits wage increases for public sector workers to one per cent per year over the course of a three-year moderation period -- is part of the problem.

“Of course it’s not just [Doug] Ford’s fault. It’s decades of not investing in our health-care system but it’s very clear that another Ford mandate would be disastrous,” she said. 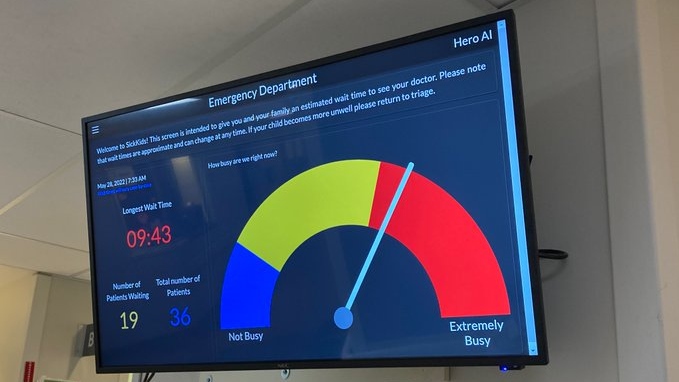 A screen displaying the wait times at Toronto's SickKids hospital are seen on May 27, 2022. (Twitter/@jvorster81)

Vorstermans' recent experience at SickKids may not be unique.

The hospital told CTV News Toronto earlier this month that wait times are now up to four times longer than they were one year ago for children with lower acuity concerns, like fever, cough, and vomiting.

“Seasonally, we’ve never had volumes this big in May in SickKids’ emergency department’s history,” Dr. Daniel Rosenfield, staff physician in the division of paediatric emergency medicine, told CTV News Toronto in an interview. “I think we’re on average three to four times longer for the given triage level than we have been.”

There are alternatives, however, for parents seeking care for their children in the face of long wait times in the emergency room.

SickKids launched their Virtual Urgent Care platform last year for existing patients and expanded access to the general public at the end of March.

The platform asks parents to input their child’s name, OHIP number, and symptoms before they are directed to a family doctor, the ER, or a virtual visit with a doctor in real time.

Rosenfield said the program not only saves parents a potential trip to the ER, but allows physicians to see patients in the comfort of their own homes.

With files from Pauline Chan

Canada has sent one of its military planes to Haiti to help the country cope with escalating violence.

Ukraine's defence minister expressed confidence Sunday that Western allies would agree to the country's latest weapons request -- warplanes to fight off Russian forces that invaded nearly a year ago.