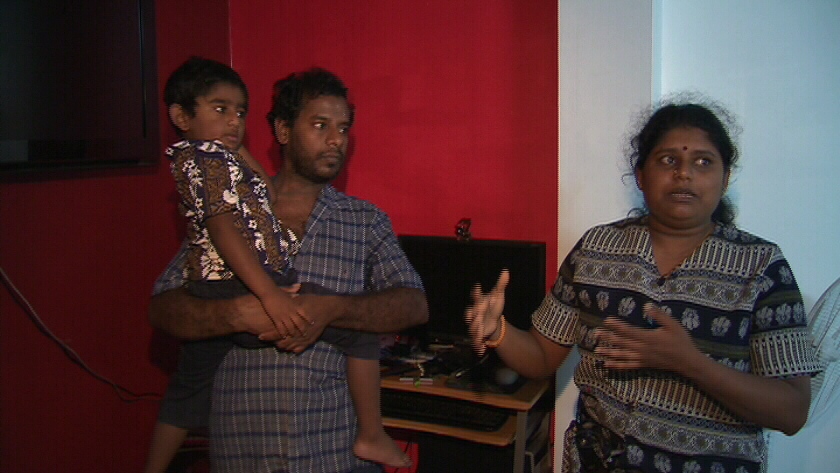 A mother speaks out about a terrifying home invasion that occurred in her Scarborough home on Sunday, Aug. 12, 2012.

A mother said a gun was held to her three-year-old son’s head during a Scarborough home invasion that has left the family shaken.

Sriranjani Nithiyananthan told CTV Toronto that her son has barely slept or spoken since the Sunday afternoon robbery.

Police said two men, one of whom was armed with a handgun, broke into a home near Sheppard Avenue and Neilson Road around 3:30 p.m.

“First I yelled, then my son yelled,” recalled Nithiyananthan. “He said, ‘If you yell I shoot.’”

Nithiyananthan said the man pointed a gun to her son’s head and demanded to know where the family kept their money.

The men then forced the family to the living room floor, bound their hands and feet and taped their mouths shut, said Nithiyananthan.

The men also searched the robbery victims while they were bound and broke the telephones in the home.

Nithiyananthan said the intruders didn’t find the cell phone she was carrying in her pocket, and once the men fled her home, she managed to call police.

By the time police arrived, the men had escaped with money, jewelry and some electronics.

Investigators said the home invasion was random and they are looking for the two suspects, both white males.

The first suspect is described as between 25-35 years of age, about 6’2”, with a slim build and short black hair. He was last seen wearing a black baseball cap and a light-coloured grey tracksuit.

Nithiyananthan’s husband Varatharayan said while he’s traumatized by the robbery, he’s thankful no one in his family was physically hurt.

“I think of my wife and my kid, and my other kids. I want to still live my life right.”

Anyone with information is asked to contact police at 416-808-7350, or Crime Stoppers anonymously.

With a report from CTV Toronto’s Scott Lightfoot