A mother says she is traumatized by video footage circulating online showing three police officers holding down her 14-year-old son in Toronto's north.

The incident occurred just before 6 p.m. on Tuesday, in the area of Jane Street and Shoreham Drive, in North York. In security video of the incident, officers are seen questioning someone before a struggle breaks out.

In the videos posted to social media, three police officers are seen holding a teenager down on the ground, pulling his arms behind his back in what appears to be an attempt to put him in handcuffs. The teen appears to be struggling against the officers.

In one of the videos, an officer appears to punch the teen while he is on the ground. 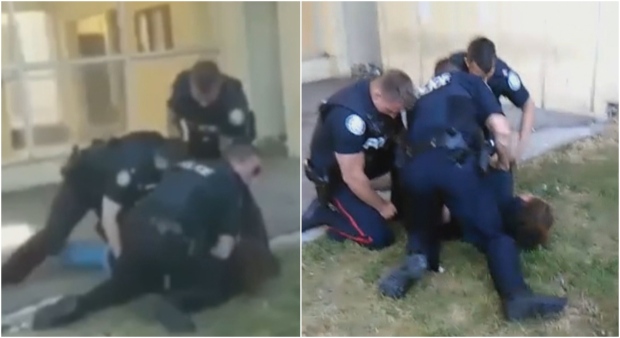 “I’m horrified,” the teen’s mother told CTV News Toronto. “I will never get that out of my memory. Every time I close my eyes, I can hear my son screaming for me. I can see the police officers punching him.”

“He’s fourteen. He just got beat up by three grown police officers.”

CTV News Toronto spoke with the boy’s mother while she was waiting for him outside the courthouse on Wednesday. The teen and his mother cannot be identified under the Youth Criminal Justice Act.

The boy is facing charges, but it is not known what they are in relation to.

In a statement released on Wednesday, Toronto police said officers responded to public complaints of people loitering, as well as drug activities.

“When the officers arrived on scene, they began investigating several people loitering and engaging in non-criminal drug activities which would have carried at maximum, a fine. One person refused to identify themselves as required by law, and after an interaction, caused the investigation to become a criminal offence,” the statement read.

“Due to the age of the person, we cannot comment in full detail in good faith, despite the fact the identity was made public by his parent. It is completely within the family’s right to lodge a complaint with the Office of the Independent Police Review Director.”

The teen is scheduled to appear in court on Aug. 27.