A mother of three children is speaking out on ongoing travel delays after spending a night on the floor of Toronto Pearson Airport with her young kids during a weekend of travel that she says cost her more than $1,000 in unexpected expenses.

Jennifer Macdougall left from Whitehorse, Yukon, on June 25 with her 15-year-old, her seven-year-old, and her six-month-old baby. They planned to travel to Sydney, N.S., with Air Canada to visit relatives, stopping over in Vancouver and Toronto on the way.

“I’m on maternity leave right now,” Macdougall told CTV News Toronto Tuesday. “I figured I'd take them home for a couple of weeks and have a nice summer away.”

The journey, however, proved to be more complex than Macdougall anticipated. A delayed first flight from Whitehorse to Vancouver set off a domino effect of missed flights, as their arrival into Vancouver was too late to catch their connecting flight to Toronto.

After a five-hour delay in Vancouver, they were put on a different flight to Toronto, landing at Pearson airport around 10:30 p.m.

Macdougall says she then went to the Air Canada customer service desk to get information on how to proceed to Sydney, and where to get meal and hotel vouchers that had been promised to her during the delays.

“I just wanted to get to a hotel and put my kids to bed for the night," she said.

However, she claims the Air Canada customer service desk was less than helpful, saying she was told she wouldn’t be able to fly out until the next day and saying she was denied meal and hotel vouchers. 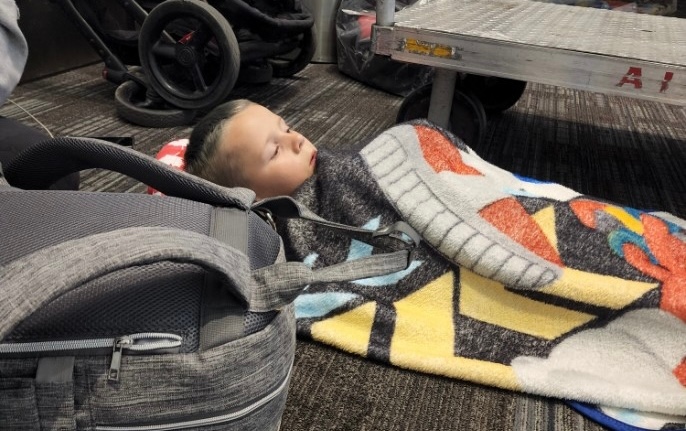 When reached for comment, Air Canada said they are looking into Macdougall’s case and that they'd “deal with the customer directly.”

“They just kept telling me they had no rooms left,” Macdougall said. “So, I said, ‘I have to sleep on the floor with a six-month-old baby?’ and [the representative] said, “Yep, that's what you have to do.’”

Macdougall said she was promised a connecting flight would leave at 7:30 a.m. the next day.

So, she spent the night on the floor of the airport with her two children and baby, an experience she called “awful.”

“I didn't want to leave [my kids] unattended for me to be able to get some sleep, so I had to sit up and stay awake all night,” she said, adding that she did not have access to diapers or a change of clothes during this time, and that she was forced to pay out of pocket for food from nearby shops.

She also says her kids are “traumatized” from the experience.

“This is the first trip [my seven-year-old] actually remembers post-COVID and he's completely devastated,” Macdougall explained. “He doesn’t know this isn’t normal.”

When 7 a.m. came around, Air Canada then cancelled the flight they told Macdougall her family would be on, she said.

“I've never, ever been treated like that in my entire life,” Macdougall said. “My kids were crying.”

They ended up agreeing to fly to Halifax, instead of Sydney, in the hopes of arriving in Nova Scotia faster, but this required a connecting flight in Montreal.

Once they landed in Montreal, they were subject to another cancellation and forced to spend an additional unexpected overnight – this time, in a hotel paid for out of pocket – before getting on another connecting flight that got her as far as Halifax, N.S.

Macdougall says Air Canada did not offer accommodations for that second night, either.

Now, Macdougall is still in Halifax, awaiting her and her family's luggage, lost amid the delays, cancellations and rebooked flights. Tomorrow, her relatives are scheduled to come pick her and her kids up from Halifax and drive them to Sydney. She says she doesn't know how they will get their lost luggage.

“We are probably owed $1,000 from the whole weekend,” she said, noting that, at the time of publication, Air Canada had not reimbursed her for any costs.

In a statement to CTV News Toronto, Air Canada said, "With the resumption of travel post-pandemic there have been more instances of delayed bags, and this and the other challenges the industry is facing around the world are well-understood and have been well publicized."

“One reason for this is that there are simply more people travelling and more bags. Just ourselves, we now often carry 120,000 or more people per day, versus 23,000 a year ago."

The airline also highlighted the pandemic has changed the "global operational environment," resulting in "security and customs lines, aircraft being held at gates unable to unload passengers at airports, and limitations on the number of flights by air traffic control that force airlines to make last minute cancellations."

In the meantime, Macdougall says she wants her story out there so other families won’t have to experience what she went through.

“I just want my story to be heard for one reason – it’s because I would hate to see another mother have to go through this."