Mother and her three young daughters dead in Brampton crash

TORONTO -- The Ontario's police watchdog is investigating a crash in Brampton, Ont. on Thursday that left a 37-year-old woman and her three young daughters dead.

The circumstances surrounding the four-vehicle crash, which occurred near Countryside Drive and Torbram Road shortly after noon, are unclear.

A witness at the scene told CP24 that one vehicle was driving very fast through the intersection when it collided with another car.

“He just smashed the car," she said. "My husband went over there and took the kids out."

She added that a police cruiser was following behind that speeding vehicle at the time of the collision.

The Special Investigations Unit (SIU) has been called in to probe the circumstances surrounding the collision.

One child was pronounced dead at the scene and all others who were injured were rushed to multiple hospitals for treatment via land ambulance.

Mooken initially told reporters that three children and one woman were killed in the crash but police later corrected that, saying one child was in hospital in life-threatening condition.

Police later said the child died in hospital. The children were aged one, four and six. 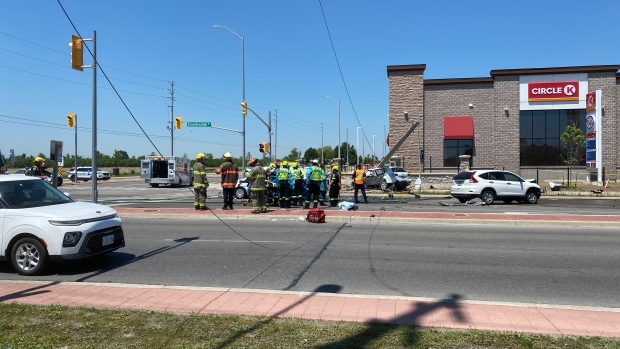 Based on preliminary information, the incident began when a Peel Regional Police officer who was travelling west on Countryside Drive observed an Infiniti on the eastbound lanes, SIU spokesperson Monica Hudon told reporters at the scene on Thursday evening.

A short time later, at the intersection, the Infiniti collided with a van that was travelling north on Torbram Road, Hudon said, adding that the van subsequently hit a light pole.

Inside the van were the mother and her three daughters. Hudon said the six-year-old was pronounced dead at the scene.

The mother and her two other daughters were rushed to a hospital where they later died, she said.

The driver of the Infiniti, a 20-year-old man, was also transported to a hospital where he remains in critical condition.

Two other vehicles were also damaged during the collision. Hudon noted no other serious injuries were reported.

“Understanding what transpired once the officer observed the Infiniti is part of the SIU’s investigation,” Hudon said.

“It's still very early on in the investigation and determining that will be very important in the coming days.”

When asked if the Inifinti ran a red light, Hudon said it will be part of the investigation, as well as, whether the officer’s lights and sirens were activated.

She said the SIU will conduct a thorough investigation as quickly as possible.

Images from the scene show multiple damaged vehicles and debris scattered around the intersection where the collision occurred.

One vehicle appears to have struck a light standard after driving up onto a sidewalk. 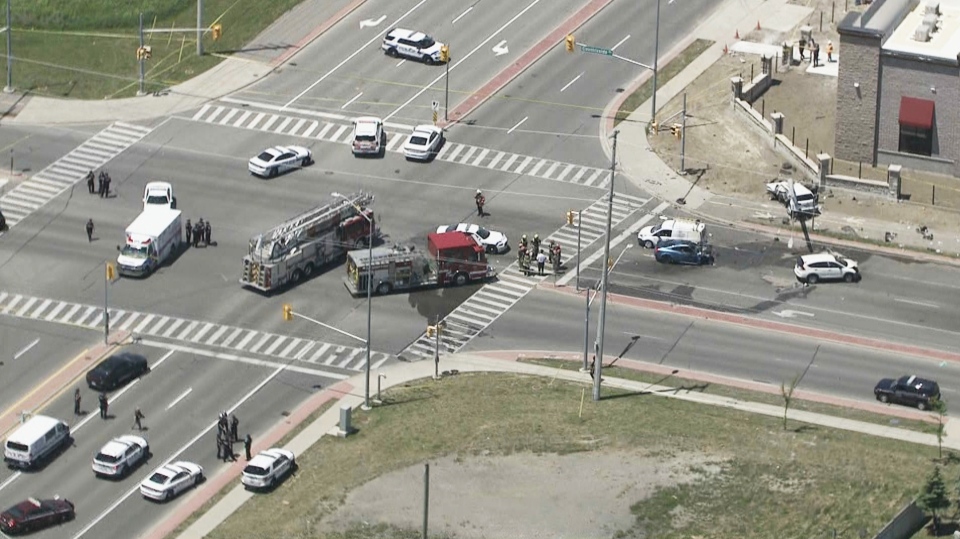 The area is expected to be closed for several hours for the police investigation.

"I think easily we are expecting this road closure to go well into the evening hours, just due to the scope of how many vehicles, the incident scene, and the fact that this is now going to be an SIU investigation," Mooken said.

"We are appealing for witnesses. We know this is a heavily populated area. There is a lot of businesses in the area as well as residences. If anybody did witness this and has not yet had the opportunity to speak with investigators, we are asking them to call us."

Cause of 'devastating' crash still under investigation

Mooken said while the SIU conducts its probe, Peel Regional Police's major collision bureau will be doing a parallel investigation into the cause of the crash.

"We will consider all factors in this investigation," he said.