“Mom, don’t tell anybody about this.”

That’s what Laura, who did not want to provide her surname, said her two young daughters told her after they were forced to spend the night on a family washroom floor at Pearson airport due to a flight delay.

The mother from Nova Scotia said she purchased tickets to travel to South Korea, where her husband is from, earlier this year.

The plan was to visit family members in Seoul after the COVID-19 pandemic disrupted their plans to do so in 2020.

“We bought the tickets back in February and never anticipated any of this mess happening,” Laura told CTV News Toronto from Seoul.

Laura's husband got a head start on the trip to meet up with family in South Korea before his wife and two daughters arrived on July 2.

But when their first flight from Halifax was delayed due to what Laura said WestJet described as an unrelated “immigration issue” at Gatwick Airport in London, her vacation plans started to fall apart and she missed her connecting flight from Toronto to Seoul.

“When we got to Toronto, they [WestJet] said ‘It’s not our fault you missed you flight. Here’s your redirection,’” Laura said.

When Laura asked about food and hotel vouchers from the WestJet representative at Pearson, she said they explained she did not qualify and that because the original delay was caused by an immigration issue, they were absolved of any responsibility. 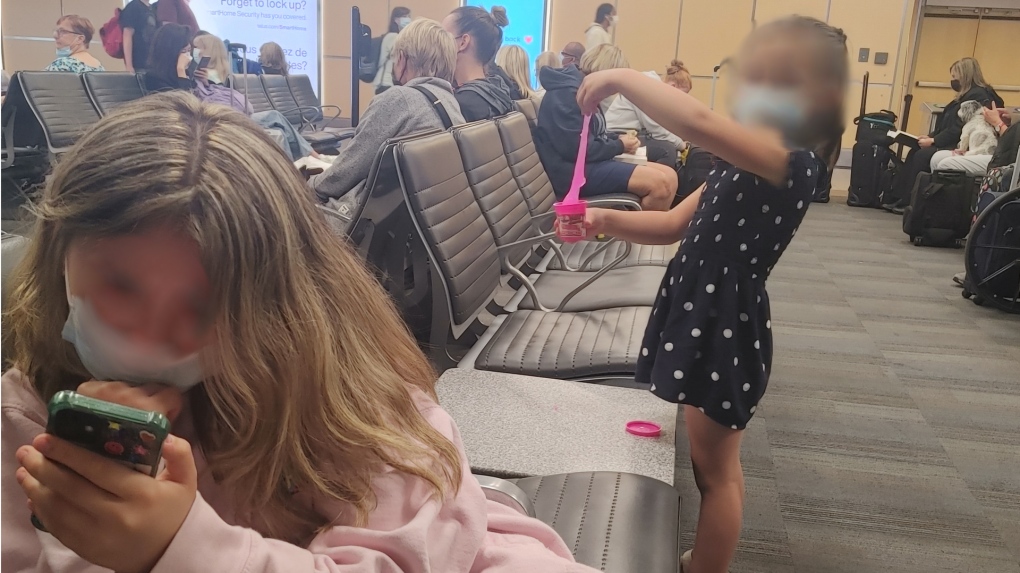 Laura said, at that point, it became clear she would have to make out-of-pocket arrangements to stay somewhere overnight in order to catch her rescheduled flight the following morning.

And with so many other travellers in the same boat, Laura said she tried but failed to find a hotel that wasn’t fully booked and within her price range.

She said she was left searching for a safe place to rest with her children overnight and had no choice but to sleep in a nursing room with a locking door.

“So we washed the floor with antiseptic wipes and laid down blankets as to not get any germs on the kids. Then the [children] fell asleep and were able to rest,” Laura said.

Laura described the experience as humiliating, but said she and her young daughters “survived” the ordeal and eventually made it on to their flight the next morning.

"It was the worst experience ever." 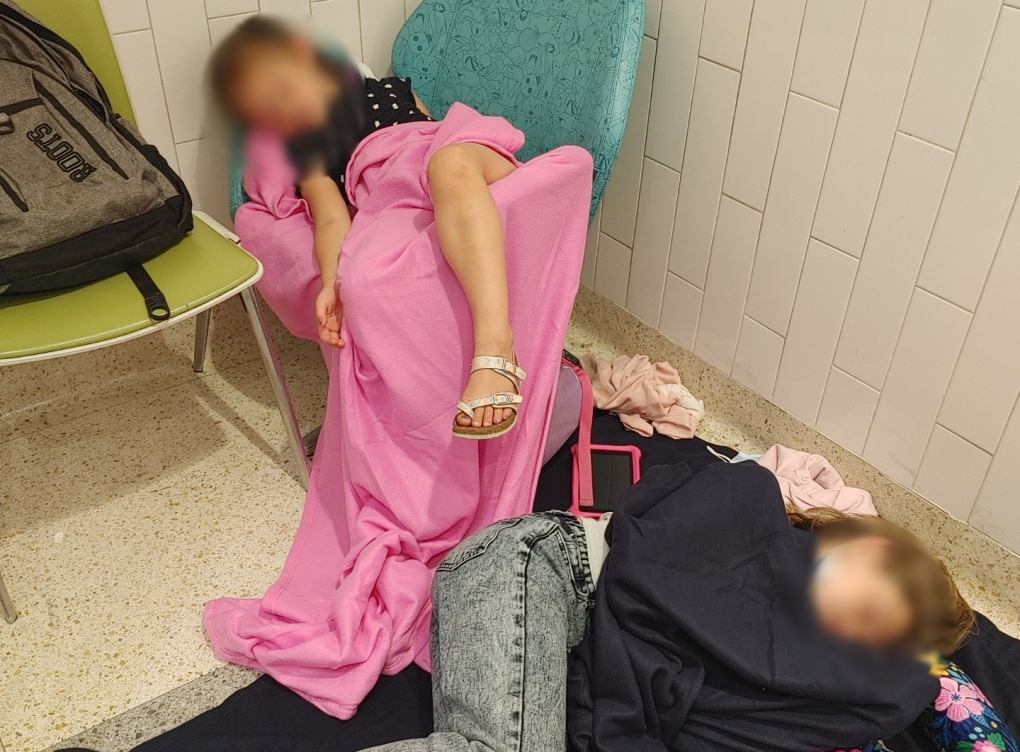 Laura's daughters are seen sleeping on the floor of a nursing room at Toronto Pearson Airport following a WestJet flight delay on July 2, 2022. (Supplied)

This isn't the first time a family travelling through Pearson has been forced to sleep in a less than ideal setting because of delays and logistics issues at the airport.

Last month, a mother and her three children were left to sleep on the floor due to Air Canada delays.

In Canada, passengers travelling by air are entitled to compensation for flight delays and cancellations under the Canadian Transportation Agency's Air Passenger Protection Regulations (APPR).

That compensation for food is supposed to kick in if a flight is delayed for more than three hours for an issue that is within the carrier's control, but not related to safety, air traffic, or customs control.

If passengers have to wait overnight for their flight, airlines have to offer hotel or other comparable accommodation free of charge.

In an email to CTV News Toronto, WestJet apologized but said that because the flight was affected due to instruction from Canada Border Services Agency (CBSA), the delay was deemed to be “outside” of their control.

“When uncontrollable events occur, guests are not entitled to compensation or vouchers,” a spokesperson confirmed.

But Air Passenger Rights President Gabor Lukacs said WestJet’s reasoning for denying Laura compensation over an immigration issue “rings hollow” and that their statement is "absurd."

“It is not an excuse in and of its own. This is an alleged ‘knock-on’ effect. The question that WestJet has to explain is what it has done to mitigate the delay -- did it get another aircraft, crew, etc.” Lukacs said.

“This also underscores the many loopholes in Canada's substandard APPR, which we have been alerting the public and the government for years. In the European Union, the passengers would have received meal vouchers and hotels regardless of the reasons,” he added. 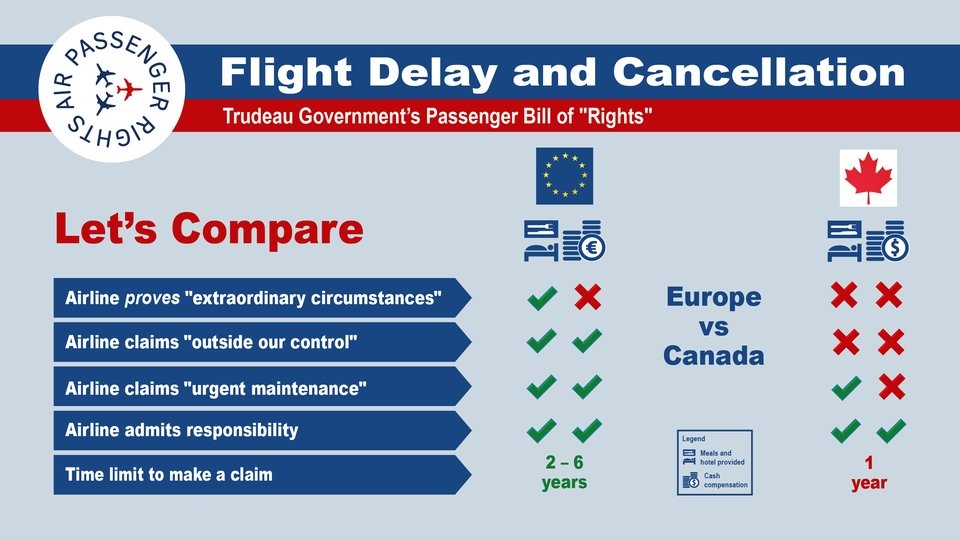 An infographic illustrating the differences between air passenger rights in the European Union and Canada is seen in this image. (Air Passenger Rights)

Speaking from Seoul, Laura said she’s happy to have made it to her destination but that she is anxious about her return journey later this month.

“I’m very wary about the return home because we have to pass through Toronto Pearson Airport again once we return home. I’m dreading it with every ounce of my being,” Laura said.

In the meantime, Laura said she hopes that WestJet will be “more considerate” with their customers going forward and that they reimburse her for the more than $300 she spent on food and blankets.

With files from Brooklyn Neustaeter and Abby Neufeld

A previous version of this story included Laura's surname, which CTV News Toronto has agreed to omit due to security concerns.

Weather could challenge containment of wildfire in B.C.'s south Okanagan

A B.C. wildfire that has forced hundreds from their homes didn't increase in size overnight, but the hot weather Sunday means "containment lines could be challenged," according to the wildfire service.

Canada's Evan Dunfee says he drew on the support of his loved ones to propel him to a Commonwealth Games gold medal.