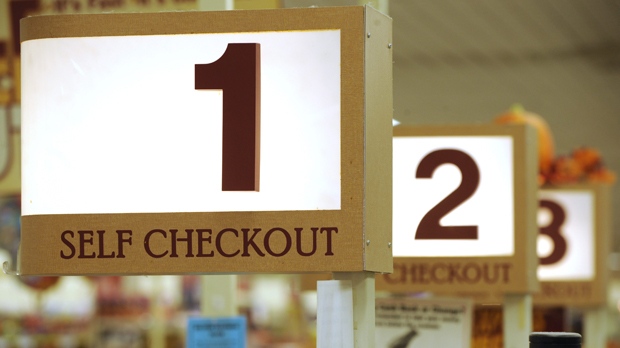 In this Sept. 23, 2011 photo, a row of self checkout lines are available at a Big Y supermarket in Manchester, Conn. A growing number of supermarket chains are bagging their self-serve checkout lanes, saying they can offer better customer service when clerks help shoppers directly. Big Y Foods, which has more than 60 southern New England locations, recently became the latest to announce it's phasing them out. (AP Photo/Jessica Hill)

TORONTO -- A new survey suggests most grocery shoppers spend 32 minutes per visit and approve of those automated self-checkout lanes.

The study out of Halifax's Dalhousie University underscores that the "worst part" of shopping for many consumers is waiting for a cashier, says lead investigator and professor Sylvain Charlebois, who predicted even more grocery technology is on the horizon.

The management professor says he was surprised shoppers spent such little time per visit and shopped only 1.29 times a week, noting that's less time and less frequent than similar studies on U.S. shoppers.

At the same time, it seems self-checkouts are becoming increasingly popular, with 25.1 per cent of shoppers "strongly agreeing" and 29.6 per cent "somewhat agreeing" that they are a good idea. Another 20.3 per cent were indifferent.

The Grocery Experience National Survey Report took place over three days in October 2018, and surveyed a controlled sample of 1,053 people online in both English and French. The margin of error is 3.1 per cent, 19 times out of 20.

Charlebois said the study encompassed stores that dedicate the majority of their footprint to food, including chain supermarkets, small independents, butchers and bakeries. The findings were set to be released Tuesday.

He said shoppers seem to like variety, with the average Canadian noting they regularly visit at least two different stores.

"It's certainly good news for competition, for independents (and) small stores. I suspect that Canadians are curious, they want to go to a place where they can find lots of different products," he said, adding that the survey did not ask about the types of store most frequented.

Consumers also said they want more human interaction, which seemed to run counter to an apparent affinity for self-checkout. But it could just come down to the type of staff interaction they want, said Charlebois.

"The end of their experience, which is probably the worst part of grocery shopping -- paying for your food, waiting in line, reading the first page of the National Enquirer -- those are things people just don't want to do," said Charlebois, whose study found 11.1 per cent of respondents always use self-checkout, and 54.9 per cent occasionally use self-checkout.

"But when there is a situation where there's some confusion, or consumers are a little bit lost, they want that human interaction. That's why that assistance factor seems to be quite high."

Still, he notes increasing automation runs the risk of pushing consumers out of the store in favour of online shopping.

About half of the respondents, 49.4 per cent, said they had never bought groceries online and were not planning to, while another 34.3 per cent said they were considering it.

"It's not as bad as it used to be but there's more work that needs to be done. I do see the day where people will be able to walk out of the grocery store without seeing someone, (without) paying anyone, basically. It would actually be withdrawn from their bank account automatically, like Amazon Go."

City dwellers appear more likely to choose a store based on its ownership, while rural dwellers seem to prioritize price.

And while just five per cent of the total sample said they currently subscribe to a meal kit service or are considering a subscription, that number rose to 60 per cent among urbanites.