More Toronto-area residents using food banks than ever before 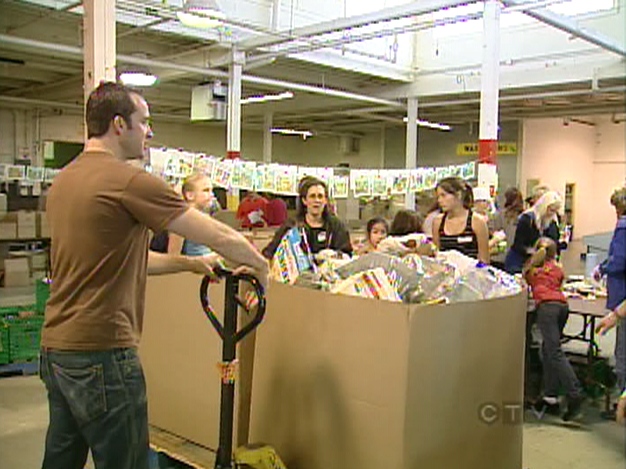 The number of people using food banks in the Greater Toronto Area continues to climb, according to a report released by the Daily Bread Food Bank on Wednesday.

The report was presented at Queen’s Park on Wednesday where the Daily Bread Food Bank called on the provincial government to help low-income households pay for rent.

“We don’t feel food should be a luxury, it should be something everyone can afford,” Richard Matern, research co-ordinator of the Daily Bread Food Bank, said at the press conference.

The group hopes that the province’s social assistance review program will recommend a new housing benefit that will provide financial assistance to low-income tenants.

“What causes food bank use is not the lack of food, what causes it is the lack of income,” said Gail Nyberg, executive director at the Daily Bread Food Bank.

One of the key issues in the report is the struggle to pay rent, as average clients who live in market housing pay 71 per cent of their income on rent.

The average median monthly income for respondents came in at $691 leaving $5.83 after rent is paid – less than a TTC round trip. One person responded to the survey saying, “You need shelter to exist. Food is a luxury.”

For some survey respondents, the decision to give up a meal was inevitable in order to pay rent or bills and utilities. The report indicates that 32 per cent of people gave up a meal to pay rent and 20 per cent to pay bills such as gas, hydro or water.

“The reality is hunger in the GTA exists. After another year of an unsteady economy and rising food inflation, our number of client visits is heading upward again, nearly 20 per cent higher than before the recession in 2008,” the report reads.

Within the GTA, Toronto had the highest number of visitors to its food banks at 946,000 last year compared to the 905 region and inner suburbs such as Etobicoke, North York and Scarborough.

Children account for an alarming number of food bank visitors at 32 per cent, a slight decline from last year’s 36 per cent. The report indicates that 25 per cent of children are going hungry at least once per week, up from 19 per cent the year before.

The report also highlighted that the demographic of people going to food banks for assistance is changing, and becoming increasingly similar to the general population. Of the total visitors, 28 per cent have a university education or higher.

This is the first survey where respondents reporting going to a food bank because of financial difficulty due to a sudden disability or sudden loss of a job, according to Matern.

Newcomers also reported facing increased struggles because despite having the skills and education they lacked the “Canadian credentials,” said Matern.

Over 50 per cent of respondents said they were born outside of Canada.

Rising food and fuel prices are of great concern according to Nyberg as the group sets to launch its fall food drive. The group is hoping to raise 400,000 pounds of food and $400,000 in additional money to carry them over until the winter drive.

“It is our sense that there are many more hungry out there,” said Nyberg.