More than 300 charges laid in investigation into auto theft ring, $11.1M worth of cars recovered 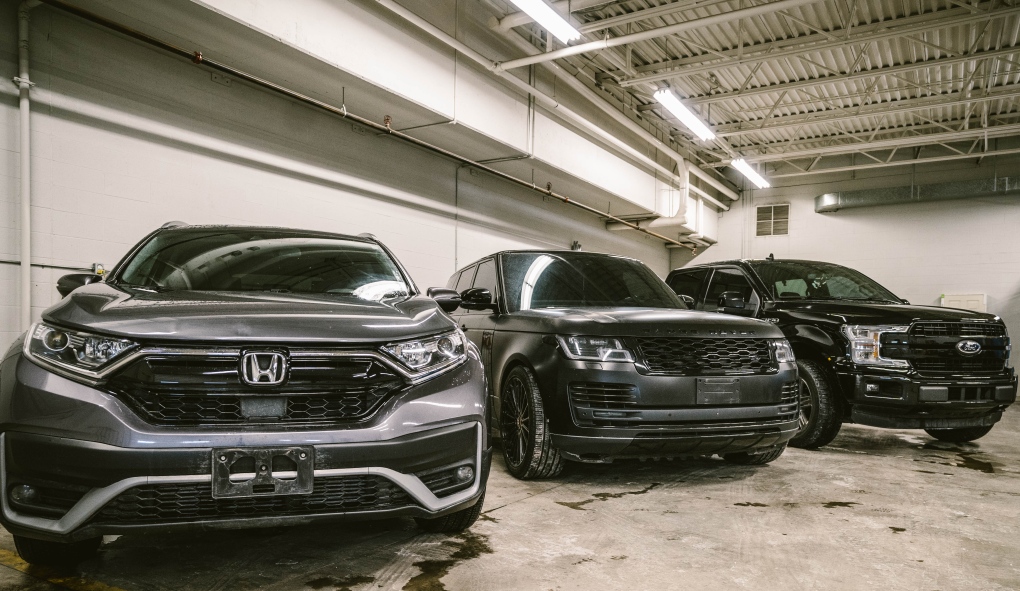 Stolen vehicles recovered as part of Project High 5 are seen in this photograph provided by Peel Regional Police.

Two dozen people are facing more than 300 charges combined in connection with an investigation into what police are calling a “prolific auto theft ring” in the Greater Toronto Area.

According to Peel police, the investigation—dubbed “Project High 5”—spanned multiple jurisdictions over a six-month period. It began after police documented an increase in motor vehicles being stolen from residents within the Region of Peel and the Greater Toronto Area.

Police allege suspects forced open a driver’s door, obtained access to the vehicle’s On Board Diagnostic Port, and then used that device to program a new key fob.

“These were not the result of relay thefts and were captured by victims and neighbouring residences on home security,” police said in a news release issued Thursday.

Investigators say the car owners lived in residential neighbourhoods and were targeted while they slept. The vehicles were then loaded into shipping containers to export to the United States and multiple West African and Middle Eastern Countries, police added.

According to police, investigators identified vehicles that had been fraudulently registered in Ontario and sold to “unsuspecting automotive dealerships, online dealer platforms and unassuming buyers.”

On Jan. 19, officers executed search warrants at nine residential areas across the regions of Peel, Halton and York.

As a result, police recovered 217 vehicles valued at about $11.1 million. They also seized a loaded .45 calibre hand gun with a prohibited extended magazine, more than $100,000 in Canadian currency, an unspecified amount of drugs, automobile forgery documents and instruments, and fraudulent government documents.

Twenty-four people were taken into custody and charged in connection with the investigation, including two people under the age of 18. While the majority of suspects are residents of the Greater Toronto Area, five are from Montreal and another two are from Uxbridge and Whitby respectively.

In total, the suspects face a combined 321 charges.

Police say the investigation is ongoing and they anticipate further arrests.

Canada's Chief Public Health Officer Dr. Theresa Tam and other federal officials are providing an update on the COVID-19 pandemic in a virtual press conference.

Foreign Minister Melanie Joly is today announcing a fresh wave of sanctions against Vladimir Putin's regime including a ban on importing Russian vodka, caviar and diamonds. The ban on the import of certain luxury goods from Russia covers alcoholic drinks, fish and seafood.

Why Canada is banning Huawei from participating in Canada's 5G network

The federal government is banning China's Huawei Technologies from involvement in Canada's 5G wireless network. Huawei and the Chinese government have vigorously denied accusations around the danger of spying, saying that the company poses no security threat.

The results of the recent coroner's inquest into the police killing of an Indigenous woman in New Brunswick demonstrate the urgent need for an Indigenous-led inquiry into systemic racism, according to the six chiefs of the Wolastoqey Nation.

A 12-year-old Ottawa boy is sharing his story after a magnet fishing trip turned up an unexpected find.

Mercedes just sold the world's most expensive car for $142 million

Mercedes-Benz confirmed on Thursday that it recently sold the world's most expensive car. A very rare 1955 Mercedes-Benz SLR coupe that had been kept in the German automaker's collection was sold to a private owner for €135 million, the equivalent of $142 million.

Blocking inflammation may be why some pain becomes chronic, study finds

A new Canadian study has found that using anti-inflammatory drugs and steroids after injury may actually increase the chances of developing chronic pain.

The cooling housing market has left some buyers with mortgages that can't cover the full cost of their home following an appraisal. Toronto-based mortgage broker Mary Sialtsis discusses what options these buyers have.