The objective was to get young sex workers home for Christmas.

During a two-month project, York Regional Police say they found 31 girls and women working in hotels north of Toronto, many of them procured into the trade by charismatic pimps and then controlled through threats and violence.

Details of the project were announced during a news conference in Aurora late Wednesday morning.

Of the 31 girls and women identified in Project Home for Christmas, police say 29 per cent were younger than 18.

“We have seen a rise in underage prostitution in the Region of York,” Insp. Keith Merith said, to which Det. Sgt. Peter Casey added: "We're digging deep into what's going on out there and this is what we're finding."

Through interviews, investigators learned the average age of entry into the trade for the girls and women was 14 years old. And only a tenth of those found were from York region. The rest, police say, were missing from homes across Ontario, Quebec and Newfoundland.

Among the juveniles were two 14-year-old girls and a 15-year-old girl who had all been reported missing from Markham homes, investigators said. All of the underage sex workers were returned home or to places of safety.

While sex trade victims “can be anyone,” Casey pointed out that pimps often prey on vulnerable teens and young women, many of whom suffer from mental illness or substance abuse problems, and promise them protection.

"The good days don't last very long,” Casey said. “The control and the direction starts and the violence starts and it gets to a point in many cases where the victim, … when they know there's help out there, they eventually have what we call their outcry and gain some trust to come to us to try and gain a normal life again."

Police highlighted the arrests of 10 men since the beginning of the year. Some of them were nabbed during Project Home for Christmas, but others were arrested as the result of ongoing investigations. A total of more than 120 charges were laid after two months of police investigations.

Investigators appealed for information about three accused men in particular.

- Brampton man Anthony "Flex" Putzu, 21, is accused of pimping out two teens, including a 16-year-old girl. The other was 19 years old and, police say, a victim of human trafficking, meaning she was allegedly forced to work in the sex trade through threats or violence.

- London man Lucas "Dimitri" Gabrys, 24, is also accused of human trafficking. Investigators allege he is a violent pimp who forced a 21-year-old woman to work in the sex trade.

- Toronto man Mohamed Wehelie, 28, is not accused of pimping. Rather, investigators allege he is a john who sought out a sex worker through an online classified ad, then violently sexually assaulted her.

In all three cases, investigators said they believe there are more victims out there. They urged anyone with information to contact the York Regional Police Drugs and Vice Unit at 1-866-876-5423 ext. 7817 or Crime Stoppers anonymously at 1-800-222-8477.

The arrests come on the heels of a Supreme Court of Canada decision that found three prostitution-related sections of the Criminal Code to be unconstitutional: Being an inmate of and keeping a common bawdy house, living on the avails of prostitution and communicating for the purpose of prostitution.

While none of the unconstitutional offences involve juvenile sex workers, living on the avails of prostitution is one of the most common charges laid against pimps who exploit adult victims.

The federal government has until December to rework the laws surrounding sex work. Until then, the existing laws remain in effect.

During the news conference Wednesday, York Regional Police stressed that as long as they have the laws at their disposal, they will use them to go after those who exploit victims through the sex trade. 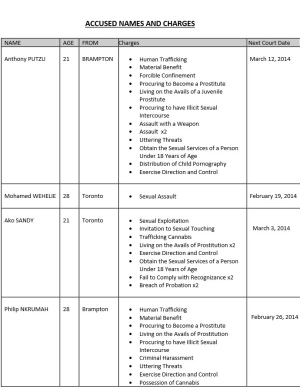