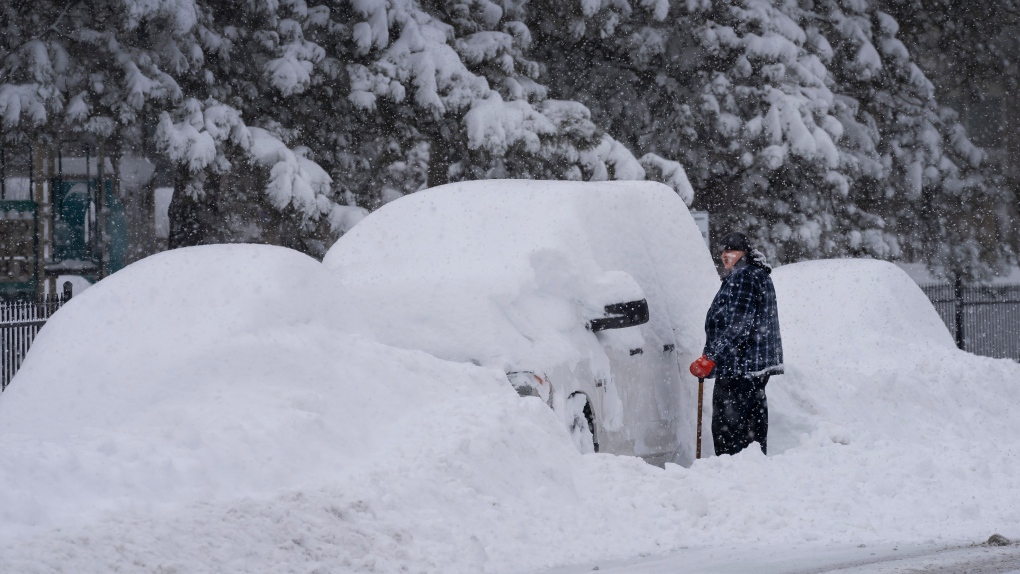 A man tries to dig his truck out from the snow after a major snow storm in Mississauga, Ont., on Monday, January 17, 2022. THE CANADIAN PRESS/Nathan Denette

Toronto’s snow-clearing operations will last up until at least the end of the week as the city expects to get more snow Tuesday night.

City officials told reporters at a news conference on Tuesday that the city-wide clean-up was still at its early stages. Meanwhile, Environment Canada reported that the city can expect two more centimetres of snow tonight.

“You have to do the plowing first and then begin the snow removal and it is something that is going to take time. This is a storm that ranks among the biggest in recent history in the city,” Mayor John Tory said on Tuesday.

The mayor said plowing will mostly continue into tomorrow, and the rest of the week will focus on snow removal.

Toronto Mayor John Tory declared a “major snowstorm condition” after the blizzard struck Toronto and other regions of southern Ontario on Monday.

The mayor said that some snow plows are facing challenges due to parked and abandoned cars on city roads. The City of Toronto has stated that it prohibits parking on designated snow routes for the next 72 hours, at the risk of fines or towing in order to allow snowplows to clear the roads.

Traffic on major highways and roadways in Toronto and across the Greater Toronto Area remained snarled on Tuesday, including Highway 401, due to vehicles stuck in mounds of snow.

The TTC has stated that about 300 or 400 buses were still stuck in the snow around Toronto on Tuesday. Service has been reduced on the transit network.

In biggest victory yet, Russia claims to capture Mariupol

In what would be its biggest victory yet in the war with Ukraine, Russia claimed to have captured Mariupol after a nearly three-month siege that reduced much of the strategic port city to a smoking ruin, with over 20,000 civilians feared dead.