Officials said the worst of the flooding that hit Ontario's cottage country over the weekend may be over, but residents are on guard as more rain is predicted to hit the region this week.

Several communities, including the City of Kawartha Lakes and the towns of Huntsville, Bracebridge and Bancroft remain under states of emergency after heavy rains on Thursday and Friday washed out roads in the area and forced several home evacuations.

"My understanding is that this is record levels in a number of locations," she said. "They're calling it the one-in-a-100-years-type flood."

Water levels are starting to drop, but Kowalski cautioned that there could still be some localized flooding. As well, more rain may hit the region this week, with Environment Canada forecasting showers on Wednesday, Thursday and Saturday.

In Bracebridge, approximately 200 km north of Toronto, water levels on both the north and south branches of the Muskoka River appear to have peaked, though they’re not expected to decrease for several more days, said John Sisson, the town’s chief administrative officer.

"These are just anecdotally exceeding anything that people have seen over the past number of years," he said.

Throughout the day water could be seen violently battering the town’s main dam. At a second dam, four docks that had been washed away could be seen floating nearby.

“We’re at historic levels. The flow and the sustained nature of the flow is really nature at its highest fury,” he said, adding that residents need to take reasonable steps to protect themselves and their property this week in the event of more rain.

“If there’s an emergency situation, they need to call 911,” he said. “We’ll get the resources to you.”

Notices to residents have been delivered door-to-door by emergency crews warning them to evacuate as some areas may experience “limited access or no access if flooding occurs,” according to a news release on the town's website.

Hydro One says customers in the Springdale Shores and Springdale Park Road areas will be without power due to rising water levels.

The Bracebridge Sportsplex and the Village Square in nearby Vankoughnet remain open to residents to who have been displaced by the flood.

In Huntsville, approximately 40 km north of Bracebridge, water levels appeared to have peaked in the downtown area, Ontario Provincial Police said in a statement Monday. Areas around the municipality have seen water levels drop, OPP added.

Mayor Claude Doughty told The Canadian Press he believes that the situation there should soon stabilize.

"My take is that everybody that is going to be displaced has been displaced. I think we’re done," he said on Sunday. He estimates 125 people from 70 homes were forced to evacuate.

Candace Walker, a resident of Huntsville, has been staying at the Hidden Valley Resort where she works. She said many people have been rescued from their homes by boats. "I've never seen anything like this here," she told CTV’s Canada AM on Monday.

Kelly Pender, the town's chief administrative officer, said the Salvation Army is working with the town to provide interim housing for individuals displaced by the flood.

"The Town of Huntsville has established various recovery working groups who are diligently working together to assess the requirements within the municipality," Pender said in a news release.

According to town officials, the Big East water shed crested Sunday afternoon and water levels in some areas have already dipped.

A number of roads in the area remain closed and power has been shut off for safety reasons in many of the affected areas.

Water levels in the town of Bancroft, located around 250 km northeast of Toronto, had stabilized by Monday and officials were not anticipating a surge, the town’s website reported.

There has been no need for evacuations, but residents are reminded to stay mindful that flood conditions may continue for some time, the town said in a statement.

The town’s local schools will remain closed on Tuesday out of concern for student safety.

Residents are advised to check the town’s website for updates on road restrictions and school closures.

In the City of Kawartha Lakes, approximately 130 km northwest of Toronto, officials said this year’s water levels have already matched those recorded in 1998, the last major flood.

Water levels on the Gull River and the Trent-Severn Waterway are expected to continue to rise over the next 24 hours within the town of Minden, the city said in a statement released Monday evening. As well, a flood warning has been issued for the shoreline areas of Balsam, Cameron, Sturgeon and Pigeon Lakes.

City and Red Cross officials said up to 50 people have been displaced. On Sunday, firefighters rescued three families trapped in their homes.

The Burnt River Community Centre remains open and evacuated residents are encouraged to register with the Red Cross at the Community Centre, even if they don’t require assistance, the city said in a statement. 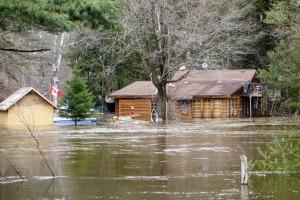