TORONTO – A woman has been found guilty of failing to take precaution of a vehicle in motion after her car, which was left on while parked, drifted and killed a five-year-old cancer survivor at a North York school parking lot almost two years ago.

On Jan. 15, 2018, Camila Torcato and her father were about to get inside their car at St. Raphael Catholic School, where she attended kindergarten, when an SUV with no driver rolled toward them and pinned the pair against their car.

Camila, who had been diagnosed with cancer at the age of three and finally completed chemotherapy that year, died in hospital due to internal bleeding and organ failure resulting from the crash.

Her father, Amilcar Torcato, survived the crash with non-life-threating injuries.

The 37-year-old driver of the Hyundai SUV, identified as Luana Brambila, was fined the maxiumum $100 for the charge under the Ontario Highway Traffic Act. 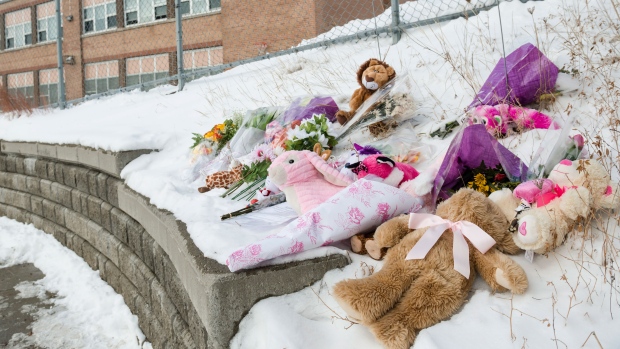 A memorial at a school in north Toronto is shown on Tuesday, January 16, 2018. (Christopher Katsarov/The Canadian Press)

The ruling, which was announced on Tuesday, was based on the fact that the Hyundai’s owner manual says owners should always use the parking brake when stopped, and to turn off the engine. A parking brake was not used and the engine had been left running on a snowy street at the time of the incident, the court ruled.

"It falls in the category of a parking offence that went horribly wrong,” Crown Attorney Jamie MacPherson said.

The Justice of the Peace Tina Wassenaar, who heard the case, addressed Camila's father in court Tuesday.

"Writing the decision was very difficult...knowing the pain you walk with every day."

The court read out a victim impact statement by Camila’s mother, Catarina Rodrigues De Almeida, who wrote that her daughter was a “fighter” and had a smile that would light up a room.

After Camila was diagnosed with cancer, she had to endure six months of chemotherapy and had three surgeries, one to remove a kidney, the mother wrote in the statement.

“Her life was filled with pain and challenges … but she persevered,” she wrote. “Camila was very excited to start her first year of school … we looked forward to seeing her grow and become a kind, successful and strong young woman.”

The grieving mother said her family’s life has been turned upside down since the incident, and that it will never be the same. 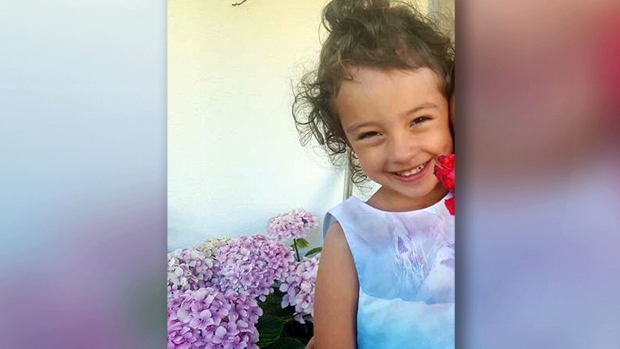 Camila Torcato is seen in this photo.

“It’s been 21 months since I’ve seen my daughter. Since I’ve kissed her soft cheeks,” she wrote. “But it doesn’t feel like 21 months, it feels like one long miserable day with no beginning and no end … a nightmare I can’t wake up from.”

De Almeida, who was not present in the courtroom Tuesday, said in the statement that since her child’s death, she has trouble smiling, laughing, and even waking up most mornings. She said she has difficult looking into the eyes of her second child because they look so much like Camila’s.

“Our daughter was tragically taken from us in a senseless car accident,” she wrote. “You don’t know what pain is until … seeing a picture of your daughter makes your heart sink into your stomach. Until a certain song makes you unable to breath because you [used] to sing it with you girl.”

She ended her statement with a farewell to her daughter.

“I’ll miss you forever my baby, I’m so sorry. I think about you every second of the day. I love you more than anything.”

Const. Kristen Lembke, one of the investigators in the case, was in tears as the victim impact statement was read in court.

"To [have seen] the family in the hospital while they waited to hear from the doctor about their daughter, that stuck with me ever since," she said after the ruling.