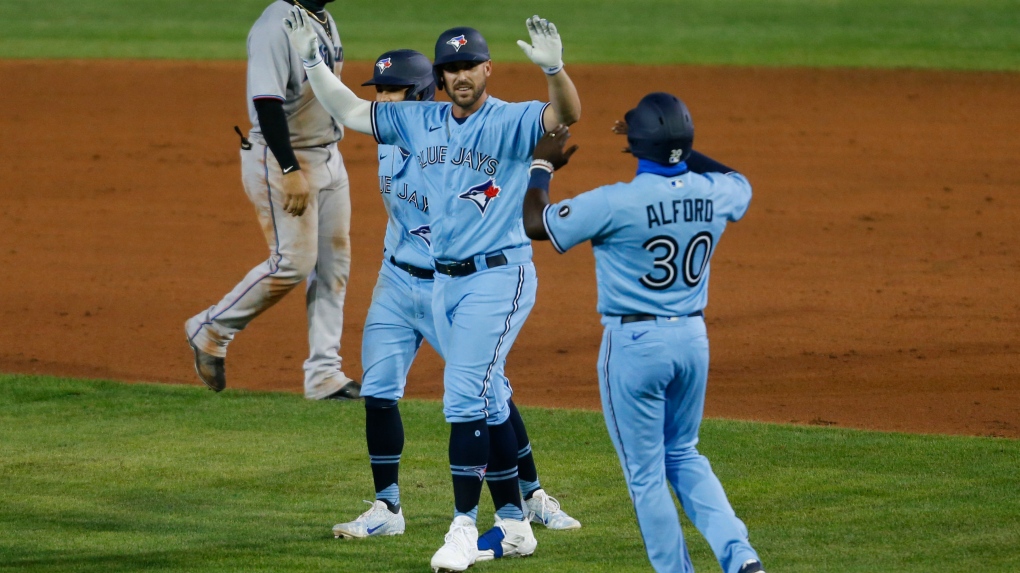 BUFFALO, N.Y. - In the first major league game in Buffalo since 1915, Travis Shaw hit an RBI single in the 10th inning and the Toronto Blue Jays settled into their new nest with a 5-4 win over the Miami Marlins on Tuesday night.

Barred from playing in Toronto by the Canadian government over concerns about the coronavirus, the wandering Blue Jays spent nearly three weeks on the road before moving into the ballpark of their Triple-A affiliate as their temporary home this year.

And in the city famed for wings and beef on weck sandwiches, Toronto made it a tasty home opener at Sahlen Field. The downtown park, a couple blocks from Lake Erie and seating nearly 17,000, was empty because of the virus outbreak.

Francisco Cervelli's three-run homer with two outs in the Miami ninth made it 4-all. Logan Forsythe then nearly put the Marlins ahead with a long drive in the 10th that originally was ruled a two-run homer, then reversed to a foul ball on review - the replay cameras were among the upgrades made at the park to get it up to big league standards.

The Blue Jays loaded the bases with one out in the 10th and Shaw singled to right field for his first RBI in 25 at-bats with the Blue Jays.

There had not been a major league game in Buffalo since Sept. 8, 1915, when the Blues swept a doubleheader from the Baltimore Terrapins at Federal League Park. Those teams were part of the short-lived Federal League.

Baseball in Buffalo did get major play in the 1984 film “The Natural” starring Robert Redford. Playing Roy Hobbs for the New York Knights in the movie, the game action scenes took place in old War Memorial Stadium, the place that hosted football's Bills and minor league ball.

Shaw's hit might not have had the same drama as Hobbs' film-closing homer, but it produced the same result - a win.

Bo Bichette hit a three-run homer in the sixth to give Toronto a 3-1 lead and Cavan Biggio added an RBI single in the seventh.

Sahlen Field, opened in 1988, was the first in a movement of “retro” ballparks personified a year later by Baltimore's Camden Yards. Built for the Triple-A Buffalo Bisons, an affiliate of the Blue Jays since 2013, it is esthetically the opposite of Toronto `s futuristic Rogers Centre, the first retractable-roof stadium opened in 1989.

Despite the differences between the two facilities, the Buffalo ballpark in the last two weeks was revamped to capture elements found less than 100 miles away in Toronto.

Rogers Centre's “in the action” seats behind home plate have been replicated and advertisements on the outfield walls are the same as found in Toronto. Those walls, which have been green for 32 years, are now blue, a colour which now dominates much of the stadium, along with the omnipresent presence of the Blue Jays logo.

One aspect went unchanged: the ballpark dimensions. It's still 325 feet distance to the corners (though now designated with a maple leaf instead of a bison), 371 to left-centre, 367 to right-centre, and 404 to straightaway centre field.

Extensive renovations included a new infield, the home clubhouse being placed in the area where batting cages once existed, the visiting clubhouse being housed in a large temporary tent behind right-centre field, and the Blue Jays' weight room and practice batting cages taking up space in what is normally a public concourse. The work enabled Toronto to occupy its familiar third base dugout, as in Toronto.

“The first couple of days, we'll still feel like the visiting team,” Toronto manager Charlie Montoyo said in his pre-game comments. “After the next few days, then it'll feel like home.”

Miami, too, has been no stranger to the road, spending the last three weeks away from home, including a quarantine spell in Philadelphia while combating a spate of coronavirus diagnoses.

Miami still has 19 players on the injured list, but has gone three straight days without a transaction. Toronto has three players on the IL: outfielder Derek Fisher, and pitchers Ken Giles and Trent Thornton.

Marlins: Jordan Yamamoto (0-0, 9.00) will make his second start this season for Miami. He allowed four runs in his first start on Aug. 6 at Baltimore.

Blue Jays: Nate Pearson (0-0, 2.70 ERA) will make his third career start when Toronto wraps up the two-game series against Miami. He has 10 strikeouts in as many innings.