TORONTO -- Video has emerged showing the wild moments a large group of people gathered in the middle of a Toronto street, setting the road on fire while doing doughnuts in the intersection.

Toronto police said they were called to the McNicoll Avenue and Placer Court area in North York around 2:30 a.m. after receiving reports people were stunt driving, discharging fireworks and participating in other prohibited activities.

In one part of the video, which was posted online, a person can be seen pouring a flammable substance on the road, creating a massive ring of fire.

A car can then be seen doing doughnuts in the middle of the flaming ring. 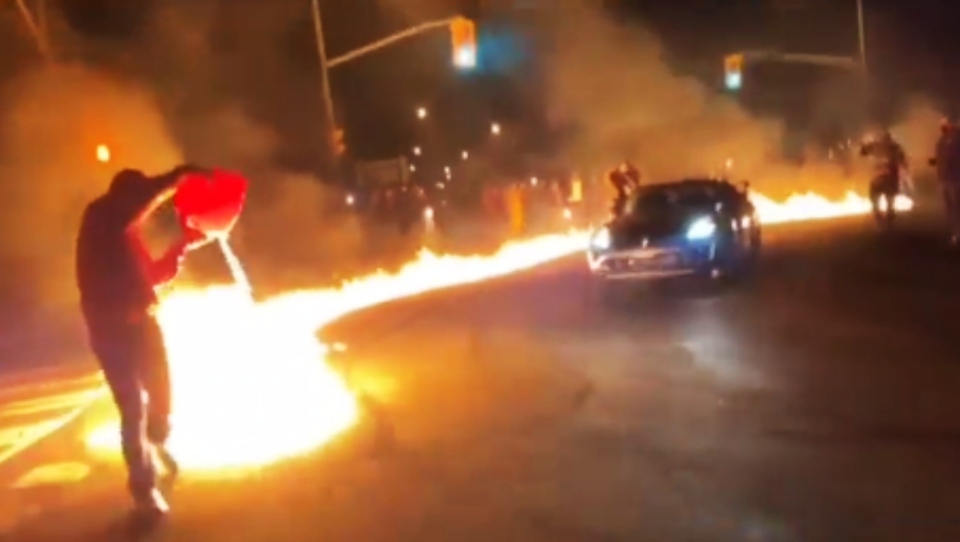 The video then cuts to when police arrive at the scene.

According to police, officers were met with hostility when they arrived and said that "members of the group jumped on a scout car causing extensive damage."

Police said when the group was dispersed they then made their way to other areas of the city and engaged in similar activities.

At least one person was charged with stunt driving and failing to remain at the scene of a collision, police said.

Mayor John Tory said such gatherings threaten the work many have done in containing the virus, leading to continued lockdown and postponement of life returning to normal.

“If people decide to go against the public health guidelines and break the rules, they should be prepared to face the consequences. The police officers who arrived on scene last night were confronted with hostility which is also unacceptable. Those responsible should face the full weight of the legal consequences,” Tory said in an email statement to CTV Toronto.

“I am urging people to please follow the public health guidelines which have been created to protect residents and help us get through this pandemic.”