TORONTO -- Surveillance camera footage has captured the moment a truck slammed into parked vehicles near an elementary school in the city’s west end.

Emergency crews were called to Perth Avenue and Dupont Street just around 12 p.m. after up to 15 vehicles and a home were struck by a white truck.

Video obtained by CP24, taken by a doorbell surveillance camera, shows the white truck driving down Ruskin Avenue, outside Perth Avenue Junior Public School, and slamming into at least two cars before going out of the frame. 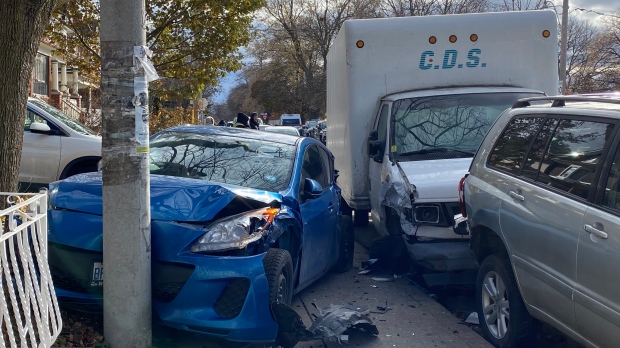 After the truck came to a stop nearby, police said witnesses helped detain the man, aged in his 30s, from fleeing the scene.

The driver was arrested and taken to hospital on suspicion of impaired driving. Police later said the man showed no signs of impairment but was charged with dangerous driving, leaving the scene and possession of property obtained by crime.

Police said no one was injured.

Update:
- the driver of the vehicle reportedly struck up to 15 vehicles and a home
- serious damage to some of the vehicles
- units are OS
- driver possibly impaired, now in custody, being taken to a police breath technician
- no injuries reported#GO2254515^adc