TORONTO -- A new video recording obtained by CTV News Toronto raises questions about how the Toronto Police Service handled a report about an alleged assault by an officer on a Black TTC rider.

The video -- which is evidence in an ongoing trial -- shows a Toronto staff sergeant appearing to go to great lengths to avoid acknowledging injuries in a man he’s booking, as the man complained about being choked and hurled to the ground after he was accused of not paying his fare.

“He choked me out on the bus,” says the man, Chase Richards, to a booking staff sergeant at 43 Division. “I could hardly breathe right now. It’s hard for me to stand.”

“Stop, stop, stop,” the staff sergeant replies, and asks Richards to go through his injuries repeatedly, appearing to dismiss them.

“So, you’re in good health?” the staff sergeant asks.

“Before I was arrested. Now I’m not in good health right now,” Richards responds.

“You look pretty good to me,” the staff sergeant says.

Later, the staff sergeant is seen in the video examining Richards.

“There’s not a scratch or a mark or an abrasion, do you agree?” the staff sergeant asks.

Richards was released the next morning, facing a charge of mischief and causing a public disturbance.

Court documents show a doctor diagnosed Richards in January with a calf injury, and a bus surveillance video also released by the court appears to show a pair of officers arrive at the bus; within about 25 seconds one appears to put his hand around Richards' throat and push him to the ground. 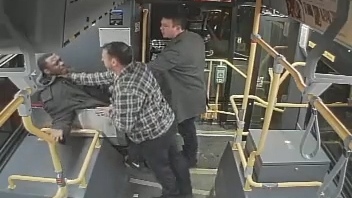 It also shows the Presto card reader on the bus flashing green as he taps his card, implying he did pay his fare.

That video is now evidence in the trial of Detective Christopher Hutchings.

Court documents indicate a charge of assault against Hutchings was sworn on January 20, 2020.

Nigel Barriffe of the Urban Alliance on Race Relations listened to the 20-minute recording and said it was “upsetting."

“The very people who are supposed to keep him safe and care for him refused him that medical attention,” Barriffe said.

“This young man’s rights were being trampled over and over again. For me it’s an example of anti-black racism that continues to be prevalent in the police,” Barriffe said, renewing his calls to defund the police.

Abby Deshman of the Canadian Civil Liberties Association said the video illustrates how hard it can be for people seeking justice, especially when they making allegations about police.

“There’s a conflict of interest inherent in the police investigating the police,” Deshman said. She said that in cases of death and serious injury, an officer is required to report an injury to Ontario’s Special Investigative Unit. But it’s not clear Richards’ injuries rose to that level.

Richards should have recorded the injuries and provided information about the path to complain about his treatment, she said.

“It becomes very clear watching this why it is so incredibly difficult for people to bring forward allegations and information they’ve been mistreated by police. People are routinely disbelieved,” she said.

Former prosecutor Calvin Barry said the booking officer has a tough job and said they have to deal with a lot, including people who fake injuries to avoid going through a booking process.

But he said it’s important to not prejudge a situation.

“There’s been a movement that police have to do a little bit more to make sure that people are ok,” he said.

The Toronto Police Service didn’t offer a comment on this story, saying it’s still before the courts. The staff sergeant didn’t respond to an e-mail, but the TPS confirmed that he does not face any discipline.

Hutchings' case will resume at the end of July.